Moebius (November 7th and 8th at the Cleveland Cinematheque) 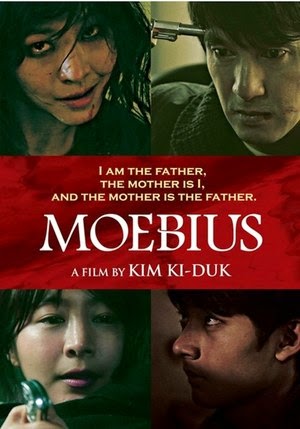 Every now and then an arthouse movie comes along that just wants to ruin your day. Movies like Passolini's SALO: 120 DAYS OF SODOM or Lars von Trier's ANTICHRIST that dig deep into the darkness of humanity and rub your face in it. Movies that, however expertly made, are about as far from the concept of entertainment as possible. MOEBIUS is just such a film. Within its first 15 minutes, we witness a woman (Lee Eun-woo) try to castrate her adulterous husband (Jo Jae-hyeon). Failing that, she then turns on her teenage son (Seo Yeong-joo), eating the boy's severed member for good measure. Fun times.

And it just gets more bizarre from there. The father, wracked with guilt, searches online to find ways for his son to still achieve sexual pleasure. Ultimately he stumbles upon information about how intense pain can result in orgasm and passes it on to the boy, who by this time has become infatuated with his father's mistress (also played by Lee Eun-woo). Evidently this link between pain and pleasure is an area South Korean director Kim Ki-duk has explored in the past. Not being familiar with the filmmaker's prior work I can only say that it reminded me of David Cronenberg's 1996 CRASH, in which car accidents and the horrible injuries sustained in them are eroticized by a group of underground fetishists. Oh, and did I mention there's no dialogue in the entire film?

It's safe to say that the audience for a movie like this is not a large one. The film is skillfully made and well acted, but it's an awful lot of disturbing imagery and ideas to ask most people to sit through. For those enured to extreme fare, however, there's much here of interest. The film deals with themes of inevitability and, as the title indicates, the way events tend to repeat. And there's some stuff that I just plain didn't get, probably due in part at least to cultural differences. It's a rough ride, and the payoff maybe isn't quite worth it, but if you can get past the film's more shocking aspects it's a grotesquely mesmerizing way to spend 90 minutes. 3 out of 4 stars.
Posted by Bob Ignizio at 12:00 AM