Let Me Out (now on video) 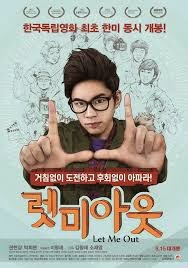 I shouldn't perhaps mention this, but I have my Christmas gifts already picked out for local filmmaker Robert Banks, who is currently in post-production with a full-scale 35mm celluloid feature drama he is shooting with his students at the New Bridge arts school in downtown Cleveland. I'm giving Robert a few of my spare DVDs and Blu-rays (it's not as though I have anything else, really), one of which is sure to hit home for him right now. Like I said, nobody tell Robert. Yeah, sure, as if anybody is reading this right now.

One of the cinematic assortments in my theoretical holiday gift basket is the 2013 South Korean import LET ME OUT, which was - dig this, Robert - created by filmmakers/instructors Jae Soh and Chang Lae Kim at the Seoul Institute for the Arts, using their own students. So...your idea wasn't all that original. But at least watch what these guys did for compare-contrast and cautionary tales out of film-class life.

LET ME OUT (whose title is an obscure takeoff, indeed, on the vampire movie LET ME IN) early on name-checks Tom DiCillo's LIVING IN OBLIVION, remember that one? DiCillo's comedy was a behind-the-scenes look at the little showbiz absurdities, ego clashes and snafus on a low-budget indie-art-movie set. Critics, and especially filmmakers, just adored LIVING IN OBLIVION for its pitch-perfect vibe, and many can quote the dialogue. But even as I watched it way back when, I thought that, you know, non-filmmakers, AKA civilians, AKA normal people, probably wouldn't be able to relate to a minute of this stuff and just be bored.

And that's about the deal with LET ME OUT, except there's a great K-pop theme song.

Setting is a fictitious South Korean film school. Student Mu-young is a cineaste who's never shot a single frame of film. With no real social or organizational skills to speak of, all he knows is theory and worship of the likes of Scorsese and Kubrick.

For his vital graduation project, Mu-young is finally forced to take action, pick up a camera, gather a crew and actually make something, which, for him, ends up being no Kubrick or Scorsese tribute but, rather, zombie-apocalypse horror (which is so close to film-school truth it hurts). Mu-young contends with a misfit cast and crew who are part student, part cast-offs from the commercial Seoul movie industry who can't get better gigs at the moment.

Besides committing the tyro mistake of falling in love with one of his actresses, Mu-young also determines, for art's sake, to avoid computers and shoot on genuine film (a la Robert Banks), requiring him to borrow the school's heirloom splice-tape editing suite away from the art-institute eccentric, an older undergrad, seemingly in a trance state, who has been laboring away on his own thesis film since before the era of digital video. I am given to understand you do find people like this at film schools. Creepy.

Cleveland's Robert Banks moonlights as a journeyman cinematographer. I bet he will especially like the character of a swaggering, seen-it-all director of photography who, in an unguarded moment, pleads poverty and asks Mu-young for extra money. Moreover, the unassertive Mu-young must deal with all his travails  under the smug scrutiny of a visiting VIP, a top Korean director whom Mu-young tactlessly criticized in class, and now intends to watch the kid suffer.

Somehow, in spite of all this, the zombie project gets done. Usually I tend to have little patience for movies by beginner filmmakers that are about filmmaking and movies (because these nerds possess no other significant life experiences), but in the case of LET ME OUT I'll give it a pass. Maybe because the Asian environment is a unique switch (an English-language commentary track by the co-directors is essential for catching many native cultural references). And maybe because, though he didn't set out to make a zombie picture this go-round, our own Robert Banks is living through all this right now. In Oblivion. (2 3/4 out of 4 stars)
Posted by Charles Cassady Jr. at 12:00 AM