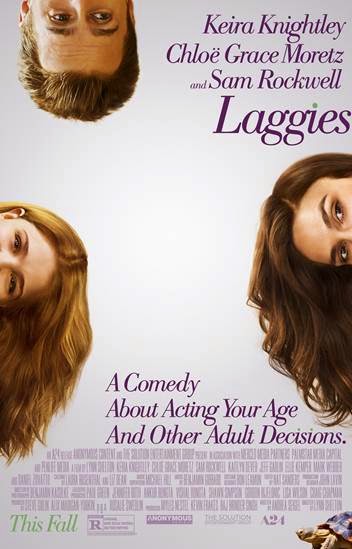 Unbound from the corsets and lace that have been her accustomed dress in myriad period dramas, Keira Knightley emerges in Lynn Shelton's LAGGIES as a teenager — albeit one in the body of a 28-year-old woman.

Deploying a more than acceptable American accent, the dark-haired British actress plays Megan, the type of young woman very familiar in indie filmdom — a social misfit who's at a crossroads in life, troubled in romance and career. Though she attended graduate school in psychology, Megan has been unable and unwilling to find a career other than twirling an advertising sign at roadside for her accountant dad (Jeff Garlin). Boyishly lissome in a white t-shirt and white jeans, she twirls most charmingly. We can understand why her dad loves everything she does, even while her mom nags her to get career counseling.

Megan lives with her earnest photographer boyfriend Matt (Eric Riedmann), and the couple are part of a tight Seattle social group that demands Megan's full participation in its rituals (baby and bridal showers, weddings, god-parenting). Megan doesn't fit in, as a bridal shower scene in her friend's Chinese restaurant illustrates. Passing by a bronzed statue of the Buddha, Megan playfully tweaks its nipples. Her joke earns a scornful lecture from her friend. “Maybe using Buddha as a restaurant decoration ” Megan retorts reasonably, “is the real joke.”

At a friend's wedding reception, Matt falls to one knee and proposes, and a panicked Megan bolts. She drives to a convenience store and is approached in the parking lot by a group of high-schoolers who beg her to buy them beer — and wine, and snacks. “Someone did this for me when I was your age,” she tells them, “so I'll do it for you.” She can't resist hopping on the kids' skateboard and, clearly longing for high school days, spends hours drinking and talking with Annika (Chloë Grace Moretz) and her friends. Annika gives her a spare cell phone so they can stay in touch.

Megan's bond with Annika' is strengthened when the teen girl begs Megan to pose as her mom at a teacher conference (an unlikely ploy). Annika's real mom, it seems, took off years ago to pursue a modeling career.

Megan, overcome by pressure from Matt to marry him, and the shock of an unsavory revelation about her dad, takes off for what she tells Matt is a week-long “personal development seminar.” She hides out at Annika's house, where she is discovered, on Annika's bedroom floor by Annika's dad, Craig (crush-worthy Sam Rockwell), a lawyer who is none too pleased to discover a grown woman as his daughter's best friend and unexpected lodger. The stage is set for a romance between pert arrested adolescent Megan and lonely, divorced Craig.

Director Shelton, who is also a screenwriter and actress, has tinkered with unconventional pairings in her films HUMPDAY (two straight men contemplate making a gay porn film) and YOUR SISTER'S SISTER (a guy falls for his female best friend's lesbian half-sister). Here Shelton explores, via Andrea Seigel's script, an immature, unfulfilled young woman longing to return to the relatively carefree days of adolescence. Megan and Annika sit on her bed applying eyeshadow and talking about boys . Shelton is a wonderfully sympathetic director, but her scriptwriting often relies on incredible situations. The plot of YOUR SISTER'S SISTER turned on the improbable idea that a gay woman would carry a condom with a hole in it in a scheme to get pregnant. In LAGGIES, Megan seems too intelligent to enjoy a friendship with a 16-year-old.

The Megan character resembles the role Knightley played as Steve Carell's slacker apocalyptic sidekick in the excellent but overlooked SEEKING A FRIEND FOR THE END OF THE WORLD. This very game actress has a versatility beyond bodice-rippers that is just beginning to be recognized. That LAGGIES rises above the limitations of its slightly wobbly script is largely due to Knightley's charm. Three stars.