Jealousy (November 20th and 21st at the Cleveland Cinematheque) 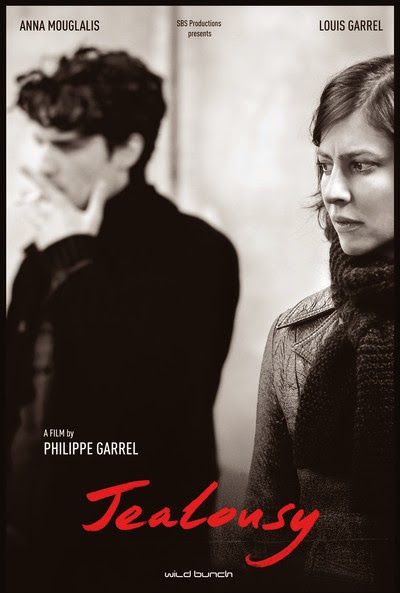 If you're the sort of person who can appreciate a film that is more concerned with capturing authentic moments and emotions than with following any sort of traditional plot, JEALOUSY may be more your cup of tea than mine. As the film opens, Louis (Louis Garrel), an actor, is in the midst of leaving his girlfriend Clothilde (Rebecca Convenant). We're not given much to go on as to his motivations other than he just wants to be with Claudia (Anna Mouglalis) more.

At first Clothilde tries to get Louis to stay, but by morning she's calmly asking him for money he doesn't have before sending him on his off with one final biting comment: “You remember not that long ago, we were sure we'd live doing what we love? You kept at it, at least.” Louis and Clothilde's daughter Charlotte (Olga Milshtein) isn't so much caught in the middle as she is a curious observer taking the break-up of her parents more or less in stride.

If there's one central theme to the film, it's the way the balance of power can shift in relationships. The way it comes full circle, JEALOUSY is a bit of a kindred spirit to another film recently screened at the Cleveland Cinematheque, MOEBIOUS, albeit a far less disturbing one. The performances are nuanced and believable, and the black and white cinematography of Willy Kurant captures the melancholy mood of the piece perfectly. Director Phillippe Garrel (father of star Louis) clearly has a grasp of what he wants to convey here, and achieves it. That said,  he has crafted a film that I can respect a great deal, but ultimately left me a bit cold due to the meandering path it takes to reach a destination that doesn't quite feel like the end of the trip. But maybe that's the point. 3 out of 4 stars.
Posted by Bob Ignizio at 12:00 AM