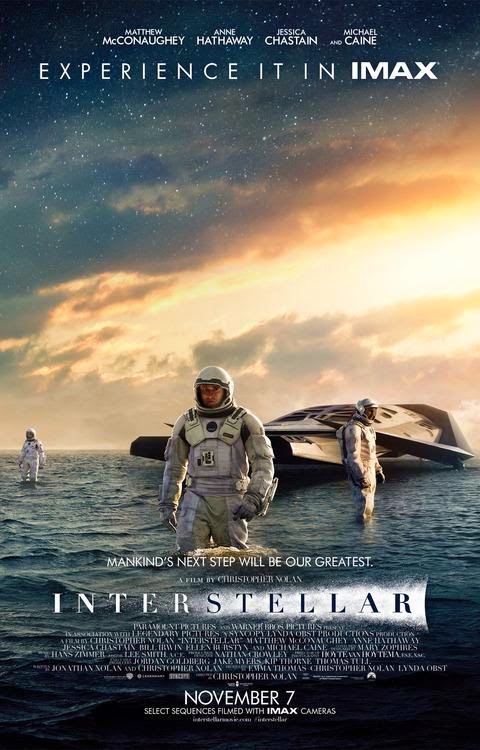 When Christopher Nolan released INCEPTION in 2010 there was some rightful, if overblown, fervor around the fact that a studio had trusted a blockbuster director with an indie film ethos to realize his own multi-million-dollar vision. It was neither a comic book adaptation nor nostalgic remake nor by-committee studio script, and it totally crushed at the box office.

Fast forward several years, and it turns out the film’s success wasn’t the game-changing industry bellwether some had hoped. Still, it got a lot of people very excited for Nolan's next original outing, and the potential of that future film to further nudge the line between boundary-pushing story concepts and crowd-pleasing action.

INTERSTELLAR has landed... and it's basically a James Cameron film, with all the taut, bombastic setpieces, over-engineered emotion, and token sci-fi ingenuity (not to mention epic runtime) that the comparison evokes.

That’s not bad news - INTERSTELLAR's story of a last ditch space mission through a mysterious wormhole to find a habitable replacement for our dying Earth  is a gorgeous, thrilling science fiction adventure. If the promise of stark alien landscapes, sassy robots and astronaut jargon all pumped full of cartoonish humanity by an over-sized heart get your thrusters firing, this is mandatory theatrical viewing.

If, on the other hand, none of these tropes prime your engine, INTERSTELLAR’s sizable, equally enthusiastic flaws, including a third act revelation that's as utterly ludicrous as it is maddeningly predictable, ensure you don't have to worry about that space movie you skipped gaining the cultural cache or mandatory viewing status of a film like Kubrick's 2001: A SPACE ODYSSEY.

The impressive cast, which features A-listers and veteran character actors alike, is lead by Matthew McConaughey and Anne Hathaway as astronauts Cooper and Amelia, who lead the wormhole-bound space mission, with David Gyasi, Wes Bentley, and the voice of Bill Irwin rounding out the shuttle crew as Romilly, Doyle, and space-bot TARS, respectively. Michael Caine and Jessica Chastain play Professor Brand and Murph, two NASA scientists who remain on Earth to feverishly work out colonization plans should Cooper and pals find a viable planet. John Lithgow, Casey Affleck and Matt Damon round out the supporting cast.

Inspired by ideas from theoretical physicist (and CONTACT collaborator) Kip Thorne, INTERSTELLAR exchanges INCEPTION's level-descending subconscious maze for Einstein's theory of relativity. It's a pretty sweet example of how tension and human pathos can be effectively mined from a raw scientific concept: Astronaut Cooper's main concern is getting back to Earth in time to save his children, who, because of the realities of hypersleep and faster-than-light travel (the possibility of which the future-set film wisely regards with all the wonderment we'd afford a microwave oven), are aging almost exponentially faster than the ship's crew.

Nolan deftly leverages the time and distance between the astronauts and their languishing planet to build and sustain momentum, cutting increasingly swiftly between the two as the film builds toward its wild, dizzying climax.

Anyone who's ever questioned Nolan's fervor for shooting with IMAX film, or his insistence that viewers see his work in the theater, will find their skepticism roundly dwarfed by INTERSTELLAR's eye-popping cinematic scope and the gorgeous photography of cinematographer Hoyte van Hoytema (HER).

Starships hum over the infinite oceans and vast, frozen wastes of distant worlds as our own blue-and-green orb is turned into a modern dustbowl – let’s call it Terrance Malick’s Days of Hell - where rolling clouds of barren earth suffocate the dwindling cornfields and ramshackle farmhouses. All of this is pierced by suitably bombastic Hans Zimmer cues drenched in icy synthesizers that nod to classic sci-fi without abandoning the seat-rattling excess of the composer's INCEPTION score.

In short, the film's visual and thematic grandiosity, paired with propulsive action sequences, almost make up for how just plain goofy some of the its emotional arcs and plot contrivances feel.

As a generalization, films about space exploration, from INTERSTELLAR to GRAVITY to CONTACT, operate by presenting a thematic dichotomy - the physical, outward exploration of the cosmos and the psychological, inward probing of the human condition. INTERSTELLAR hews closer to GRAVITY in its deployment of emotional themes, drowning out any earned poignancy with lots of crying and shouting about capital-T Themes like love and self-sacrifice.

Where Nolan's past features have frequently held forthright emotion at arm's length, deploying love as more plot device than a character motivation (see the melodramatic train wreck of INCEPTION's Dom and Mal), INTERSTELLAR finds him reveling in teary moments and sodden-eyed schmaltz. This means that while human feeling certainly resonates through the film, the weepy bits with the swelling Zimmer still reek of the same screen-written calculation that dogs his entire filmography.

Story-wise, a ridiculous early scene in which NASA first asks Cooper to pilot the mission and a couple mundane plot twists eventually give way to the aforementioned third-act reveal, an almost certainly polarizing sequence that combines the kaleidoscopic space trippiness of 2001 with the crayon-blunt dumbness of Shyamalan's SIGNS.

Or maybe that’s too cruel. Let’s go back to my initial Cameron comparison and say it’s on par with the end of THE ABYSS - a too-blatant tugging of the heart disguised as epiphany that sullies an otherwise entertaining science fiction procedural adventure.

I’m having a bit of hard time assigning stars in the single digits to a movie that offers entire swirling galaxies, there’s one thing of which I’m certain - the only people who are going to annoy me more than the inevitable acolytes who hold up INTERSTELLAR as "one of the greatest science fiction movies of all time" will be the unavoidable grumps who jadedly dismiss it as one of the worst. This is a three-hour Christopher Nolan film, people. It has the time, commitment and energy to be both. (2 1/2 out of 4 Stars)
Posted by Matt Finley at 12:00 AM