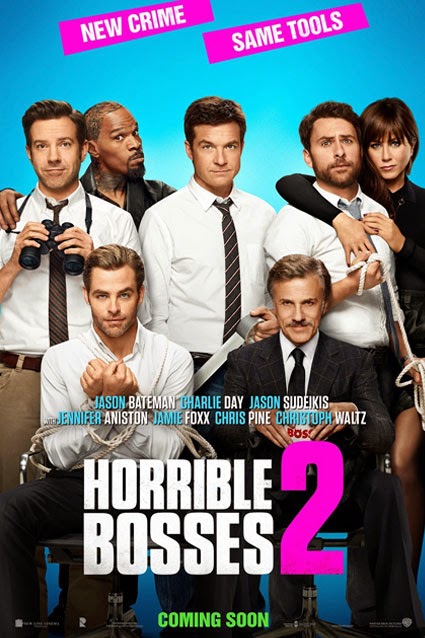 Here's a surprise, a comedy sequel that isn't a huge disappointment. Even with a change of director and writers, HORRIBLE BOSSES 2, the follow-up to the 2011 black comedy, works fairly well. It may lack its predecessor's appealing raison d'etre – to act out audience fantasies of vengeance against abusive employers – but it compensates with a flurry of funny, silly, raunchy jokes, so many, delivered so rapidly, that a second viewing might be required. This is not a meaningful or important movie, just something wickedly amusing to lift early-winter spirits. These kinds of movies aren't for everyone – for god's sake, don't bring the children -- but I can't get enough of them.

HORRIBLE BOSSES 2 finds the three hapless fellows, Nick, Kurt and Dale, played by Jason Bateman, Jason Sudeikis and Charlie Day, respectively, still looking for a way to make a living without answering to bad bosses. They have invented a new gizmo called the Shower Buddy – a shower head that automatically dispenses soap and shampoo – and are appearing on the “Good Morning Los Angeles” TV show to promote it. Of course their TV spot is a disaster, but the trio, who are anything but savvy about business, are approached by Burt Hanson (Christoph Waltz), president of Boulder Stream, a big catalog retailer. At the Boulder Stream office, Hanson's spoiled, arrogant son, Rex (Chris Pine), pulls a prank on them by posing as his dad. Hanson père ultimately makes a deal with Nick, Kurt and Dale for 100,000 units.

The excited trio open a factory and clumsily hire a staff (with Kurt favoring “hot, unqualified women”), but are quickly outmaneuvered by Burt Hanson. Like their terrible bosses in the previous movie, Hanson has screwed them over, leaving them in deep debt and desperate straits; Dale is now married and has baby triplets to support. Obviously, a scheme must be hatched.

Murder having proved beyond their capabilities in the first movie, Kurt and Dale consider kidnapping, a less lethal felony. Kurt and Dale suggest they kidnap Rex for ransom. Nick, the reasonable one, asks them, “When have you ever seen a movie where the kidnappers don't end up either dead or incarcerated? Their answer: “9 TO 5.” The threesome turn to Nick's hated ex-boss (Kevin Spacey), now in prison, for business advice. They get insults instead. “You have no balls and your fathers had no balls!” They turn to another consultant, the friendly tattooed hoodlum “Motherfucker Jones “(Jamie Foxx), who gives them pointers on kidnapping.

The plot involves the theft of nitrous oxide tanks from former dental assistant Dale's sexual-predator ex-boss, Dr. Julia Harris (Jennifer Aniston reprising her dark-haired bad girl) and a break-in to Rex's luxurious house. The verbal byplay that punctuates these two clumsy burglaries is really funny, from Nick's exasperation at his cohorts' repeatedly saying his name over their Dora the Explorer walky-talkies (no one does exasperation quite like Bateman) to his unplanned participation in Julia's sex-addiction support group.

The plot is relatively meaningless. The humor resides in the words – the silly, sarcastic interplay among these three funny actors. Watch as they try talking with a Southern accent during a ransom call, sounding instead like Gabby Hayes. (“I said Southern, not 'Old Prospector'!”) Listen to their ridiculous conversations while waiting in a getaway car, such as a game of “Fuck Marry Kill” involving the Brady Bunch boys. Jennifer Aniston, whose Julia character is not exactly vital to the story, recites some of the most excruciatingly obscene lines ever written. Waltz proves a smooth, sinister comic villain, and Pine is adorably antic as the conniving Rex.

Some reviews of the first film objected to jokes deemed racist, homophobic and misogynistic, and in that regard, the sequel does not disappoint. The presence of Foxx's “Motherfucker Jones” is a racist joke. Or is it a meta-joke about racist movie tropes? Politically correct the movie isn't, but it is funny.

In the outtakes that accompany the end credits, Bateman and Sudeikis play “Fuck, Marry, Kill” with the names of the stars of THE HANGOVER, reminding us that this series has avoided the curse of that depleted three-buddies franchise. THE HANGOVER was a funny surprise hit, but its dismal sequels failed to recapture the accidental magic. Seth Gordon and the three writers of the original HORRIBLE BOSSES did not return for this sequel, but director Sean Anders (WE'RE THE MILLERS, HOT TUB TIME MACHINE) and his co-writer, John Morris, keep it swift, light and funny. 3 1/2 out of 4 stars.