Henri Langlois: Phantom of the Cinematheque (November 12th at the Cleveland Cinematheque)

[HENRI LANGLOIS: PHANTOM OF THE CINEMATHEQUE screens Thursday November 13th at 6:45 pm at the Cleveland Cinematheque.] 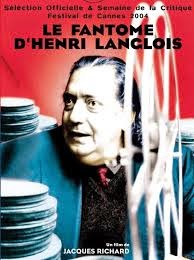 The original title of this lengthy 2004 French documentary translates literally as "The Phantom of Henri Langlois." For some reason, when it came here the distributors at Leisure Time Features seemed to think the subtitle PHANTOM OF THE CINEMATHEQUE had a nice ring. I have no idea if money changed hands with the  Cleveland Cinematheque or any of our lobbying civics groups with lots of cash from Columbus to spend, or not. There are, after all, a number of other places around called `Cinematheques.' So the coincidence could have been perfectly innocent. But if Jacques Richard's nonfiction feature shows up at the Cleveland Cinematheque this week with a fresh subtitle: HENRI LANGLOIS: GO CAVS! LEBRON WILL TAKE US TO THE CHAMPIONSHIPS AND MAKE CLEVELAND TRY TO FEEL GOOD ABOUT ITSELF A LITTLE, FINALLY, SO BUY YOUR SEASON TICKETS NOW, then you know that somebody's been a real French whore.

That was an amusing paragraph. And one of my other editors recently compared me to Hemingway (in a good sense). I should really probably quit writing now, while I'm on a roll. But Mr. Ignizio tends to expect reviews out of me, so...

Henri Langlois (1914-1977), director of the Cinematheque Francaise, the French national film museum/archive, was a tireless promoter and preservationist of film. Before DVD, VHS, cable, even television, Langlois saved and stored tons of precious, out-of-circulation, censored and forbidden celluloid. He programmed and projected it in repertory - in a stairwell, if necessary - before generations of transfixed Parisian cinephiles, cinephages (`film nerds'; Langlois makes an amusing distinction in this film), film critics and future filmmakers of the French New Wave.

A cast of witnesses to Langlois' life and times interviewed by Richard is only slightly less in number than those in THE SORROW AND THE PITY (and the major American heard is the late Jack Valenti). One interviewee tells how it may have only been thanks to Langlois that we have NOSFERATU and THE BLUE ANGEL surviving at all. On the other hand, Langlois' bias against Hollywood spectacles probably let a precious cache of "lost" American silents slip into oblivion. Oh, maybe that's why an Ohio politician came up with that "freedom fries" stuff, to retaliate for that artistic loss. Yeah, right.

After persevering through Nazi occupation - wheeling and dealing with the SS to rescue rare prints - the popular Langlois and his Cinematheque institution/collection were discomfiting to France's postwar Gaullist bureaucrats, who somewhat understandably found his autocratic management style poorly-organized and ill-suited for the appointment of any successor to continue his mission. Langlois and Langlois alone (unless you count 75 employees and a fervent partner/enabler/possible kinky lover Mary Meerson) was the Cinematheque Francaise.

When Minister of Culture Andre Malraux tried to oust Henri from his lifetime job in 1968, it resulted in riots, threats of boycotts from filmmakers from the UK to the USSR, and police scuffles with the likes of fierce loyalists Francois Truffaut and Jean-Luc Godard. It was the opening act of a whole summer of violent, left-wing Paris youth uprisings against symbols of French authority, America and NATO that French yuppies still talk about over there with some creepy nostalgia. Kind of like Kent State or Ohio University with their Halloween riots.

The documentary starts with Langlois (well-represented in clips, though it looks like he wore one suit all his life - which would not be surprising) saying he's tired of discussing 1968; maybe his ghost will take up the topic after he's gone (hence the "phantom of Henri Langlois" stuff). The narrative does indeed go beyond its hero's 1977 death to find what has become of the Langlois treasures and his legacy. And not all of it is a happy ending. Those who rioted to reinstate him in 1968 were correct, to the degree that Henri Langlois was absolutely irreplaceable to the institution and the art form.

The Hemingway-short version: if you don't know who Henri Langlois was and why he mattered - you should. So check this movie out. Langlois once said, "To love cinema is to love life," which makes a wonderful motto indeed for we cinephages. Even if, today, to love cinema around here mainly means loving comic-book superheroes or popular YA book franchises adapted to live action. Zut alors, no wonder M. Langlois thought American movies were disposable junk. (3 1/4 out of 4 stars)