Frank (November 21st and 22nd at the Cleveland Cinematheque) 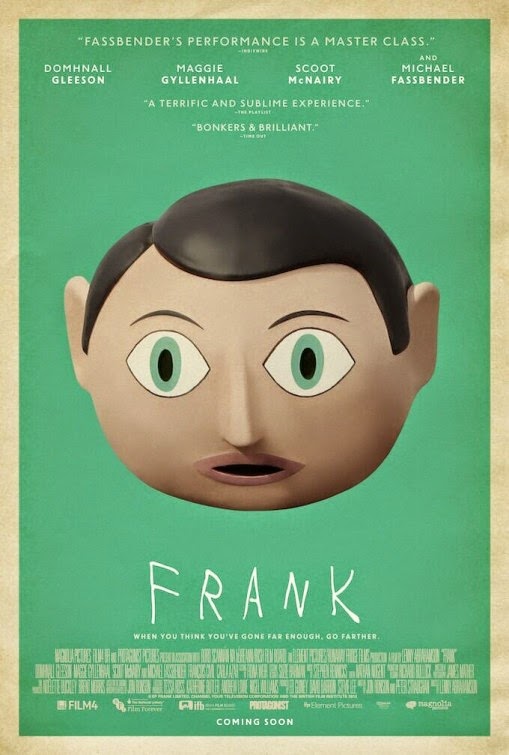 Rock & roll has always had its share of eccentrics who walk that fine line between genius and insanity. These are artists who generally don't achieve commercial success, but rather attract a loyal cult following. People like Roky Erickson, Skip Spence, Daniel Johnston, Captain Beefheart, and Wesley Willis. The title character in FRANK would fit in well with that company. His face hidden behind an oversize paper mache head which he never takes off, Frank (Michael Fassbender) fronts the experimental rock band The Soronprfbs – theremin player Clara (Maggie Gyllenhaal), drummer Nana (Carla Azar), and bassist Baraque (Francois Civil). There's also a keyboard player, but he's just attempted to kill himself leaving the band in the lurch for their gig that night.

Enter Jon (Domhnall Gleeson), an aspiring singer/songwriter/keyboard player whose personal musical bent is as vanilla as they come. Nonetheless, after talking to Soronprfbs' manager Don (Scoot McNairy) and mentioning that he plays, Jon finds himself on stage with the avant garde rockers without so much as a rehearsal. The gig ends in chaos when Clara's theremin malfunctions, and Jon figures that's that. But not long after he gets a call asking if he can come with the band to record an album. Frank has taken a shine to Jon, even if no one else in the band likes him very much.

What Jon expected to be a weekend at the studio turns out to be a much longer commitment. So intense is Jon's desire to be a rock star, however, that he leaves his old life behind to see where fate takes him. As the sessions wear on, Jon posts updates on twitter and youtube unbeknownst to his bandmates, and slowly but surely a bit of buzz is generated, resulting in an offer to play South by Southwest. And as his efforts start to pay off, so too does Jon begin to exercise more control over the band's direction and its mentally ill leader.

Gleeson gives a great performance in the central role, holding on to audience sympathies even as it becomes clear his influence is no good for either the band or Frank. Gyllenhaal's Clara elicits a similarly ambivalent response. She's hard to like, but there are a lot of layers to the character that take almost the whole film to fully reveal themselves. Fassbender literally vanishes into his part, and probably could have just dubbed his character's voice in post. Nonetheless what he does sells us on his character having the necessary charisma to drag other, marginally saner, artists along with him on his musical journey.

As odd as some aspects of FRANK are, director Lenny Abrahmson tells the story with such conviction that you buy into even the most implausible moments, like the Viking funeral given to one character seemingly without notifying any authorities of said character's death. But it's not as if rock musicians both famous and not so famous haven't done some pretty crazy things in real life.

Underneath all of FRANK's quirkiness is an exploration of the fine line between genius and insanity, and the perils of trying to water down one's art to make it more accessible. The film also does a good job De-mythologizing the very notion of the “mad genius” rock star, showing the tragic reality underneath and pointing out that it isn't mental illness that makes one a great artist; it's having the innate artistic talent and drive to keep trying to create even with mental illness as an obstacle. 3 ½ out of 4 stars.