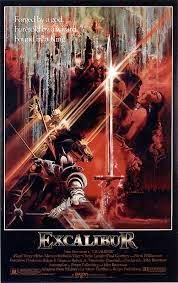 Cleveland Cinemas is reviving 1981's EXCALIBUR as a benefit showing for a local women's crisis center (A women's crisis center? Oh, you mean your marriage? Rimshot!). Why exactly this Arthurian fantasy, and not SLEEPING WITH THE ENEMY or something more appropriate? Because host for the night is WMMS afternoon-talk personality Alan Cox. And he says that EXCALIBUR holds a special place in his heart as the first theatrical feature in which he, as a youngster, saw bare "boobies" up there on the big screen.

Okay, whatever. Mr. Cox is a bright person who I have personally caught insinuating Gabriel Garcia Marquez references in his shock-jock on-air patter for the Cleveland-Detroit lowest-common denominator listeners. Sometimes I send him e-mails and Facebook posts pretending I mistakenly believe he's REPO MAN filmmaker Alex Cox. I know, I know, that's why I have no friends. But I'm still hoping it catches on as a meme.

Point is, Cox is smarter than one might think (his work on SID & NANCY was pretty good as well), and I wonder if he isn't just trying to trick Cleveland's population of Flats rats and Warehouse District drunken sluts into seeing EXCALIBUR, a real "arty" release, one that I suspect early-80s STAR WARS mania alone got slotted into lots of mainstream multiplexes. Even though it's very un-Hollywoodlike, folkloric and brooding. Viewers (and executives) of the early Reagan era who expected the King Arthur legend updated with motion-control f/x, creatures and maybe cute little robots...only got a redesign of medieval armor, mirrorlike, stylized and gleaming like the droid C3PO. Other than that, director John Boorman's vision was pretty retro rather than futuristic. Oh, and there were bare boobies.

The epic of Arthur, Guinevere, Merlin and Lancelot had been done so often, in print and on film
(even as a Broadway musical and MONTY PYTHON THE HOLY GRAIL) that I would guess Boorman must have decided not to waste time/dialogue bothering to evoke familiar characters as real Thatcher-period individual people. Only Merlin, a capering, trickster (providing the lone comic relief) has a personality. The rest of the cast are as flat as the Bayoux tapestry, perhaps intentionally so. Still, it's remarkable that such later recognizable actors as Gabriel Byrne, plus Liam Neeson and Patrick Stewart, go past virtually anonymous as are they are encased in shiny armor.


Boorman instead put the emphasis on the natural-world backdrop - the mythic, emerald-green Irish shooting locations - and a medieval mindset of brutal violence, might making right, and paganism (just barely) yielding to Christianity. It's practically bardic, more a product of 1100 A.D. than a contemporary with Indiana Jones.

In the Dark-Age British Isles, ageless wizard Merlin (Nicol Williamson) gives warlord Uther Pendragon (Gabriel Byrne) the invincible sword Excalibur, forged at the dawn of time, a weapon-symbol to unite the squabbling fiefdoms. Pendragon makes peace with his main rival, only to grow obsessed with the enemy's comely young wife, and combat resumes out of pure lust. The wizard casts a spell that grants Pendragon a carnal night with the woman, on condition Merlin have custody of the child that results from this pregnancy. Meanwhile, Pendragon gets killed for his sins.

His bastard son Arthur (Nigel Terry) is raised ignorant of his royal lineage, a humble squire in a
noble knight's family. Arthur accidentally proves his right to the title by pulling Excalibur from a stone in which a dying Pendragon embedded it. Continuing to be advised by the ageless Merlin, Arthur and his Knights of the Round Table build a kingdom of peace, until his resentful, power-mad half-sister Morgana (a super-sexy Helen Mirren) covets Merlin's mojo in the dark arts for herself. And, of course, there's the famously forbidden love affair between Queen Guinevere (Cherie Lunghi) and champion knight Lancelot (Nicolas Clay) bringing evil and unrest upon the land.

Boorman uses an all-Wagner soundtrack as well, evoking the spirits of Celtic legend to the max. This is the Arthur of Tennyson, Mallory and Geoffrey of Monmoth, not Lerner & Lowe or comics or thrill-ride Tinseltown or those kitschy medieval-themed restaurants (one was in Lorain; I wonder what the real estate is used for now?). And a dragon everyone talks about is more metaphor than monster animatron.

Yes, there are bare boobies. Probably not enough of them for the tastes of Mr. Cox's listenership, but he tricked his audience into, for a while, being teleported out of their sports bars on wet T-shirt night (knight?) and back to the aesthete of the 12th century. Not bad. Still, given WMMS and that women's shelter being involved, would it really have been a blow to Alex, I mean Alan Cox's image to show FASTER PUSSYCAT KILL KILL instead?

The first movie I saw on the big screen in which I have a clear memory of bare breasts onscreen? Naturally, at Mr. Cox's age I shunned such trash, and even today refuse to be drawn into such a lowly shock-jock conversation. But since the creator of REPO MAN brought it up, I'll guess the flick was STIR CRAZY, with Gene Wilder and Richard Pryor. Probably a homework assignment. (3 out of 4 stars)