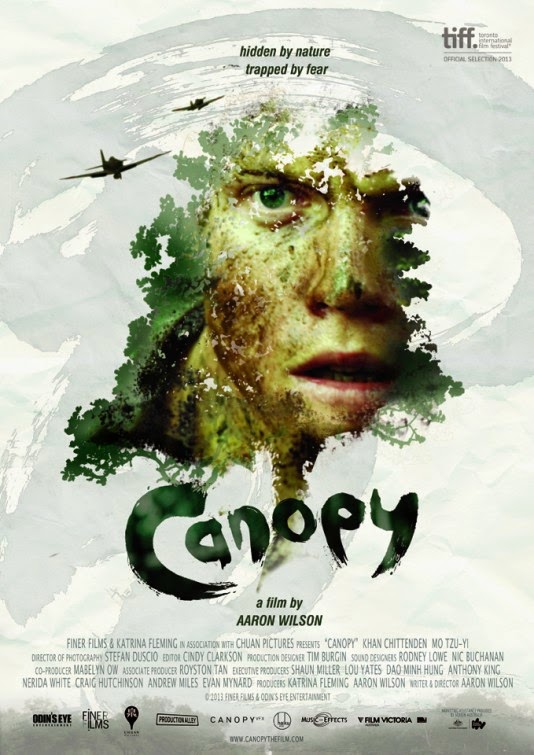 Writer-Director Aaron Wilson's first feature CANOPY is a different sort of World War II film. Or, at least, a different sort of WWII film for most modern American audiences who (myself included) tend to immediately imagine tanks and convoys flattening the Western front as the drone of Luftwaffe aircraft and the screaming V-2 rockets drown out the wet crunch of Nazi teeth meeting allied fists.

A joint production between Australia and Singapore, CANOPY is set during the 1942 Battle of Singapore, during which Japanese troops invaded the South-East island, which housed a major British military outpost. Shot against the relentless green of endless jungle and nearly dialogue free, the film follows downed Australian airman Jim (Khan Chittenden) as he mounts a desperate trek to safety amidst the invading army's blanketing swarm.

Almost immediately after processing the near-futility of his situation, Jim runs into Seng (Tzu-Yi 'Morning' Mo), a lost Chinese guerrilla he nearly mistakes for a Japanese soldier. Once each man confirms the other's allied status, they make an unspoken pact to keep each other alive.

In CANOPY, though, life is not sustained through the extermination of the enemy nor is it wrested from the forces of nature. While the throbbing light and noise of bursting artillery and machine gun fire are never far from Seng and Jim as they slink ghostly through the brush, they rarely encounter other human beings. Even when Seng is injured early on, there's no direct combat. Likewise, the forest, though omnipresent, doesn't pose a direct threat. CANOPY isn't a survivalist thriller fraught with venomous snakes or a toxic botanical lottery of unfamiliar mushrooms and berries.

In CANOPY, life is sustained sheerly by maintaining the will to  move ahead - the decision to keep living. It's at once a fundamental human drive and, from an individual character standpoint, a difficult motivation to explore without dialogue and with a timeframe that really only covers a single, brutal night.

The early moments, in which Kim and Seng attempt to communicate with each other and skirt enemy platoons are full of subtle, but expressive, body language, and filmed in wider shots that almost give the film the look of a stage play - wartime pantomime beneath an arching proscenium of leaves and branches.

As the night progresses and danger mounts, the two men take refuge in the crook of a massive tree, where the camera moves in tighter and the true oppressive presence of the stoic jungle and staccato gun reports creep vine-like into the protagonists' heads.

Jim's present dire struggle mixes with dreams of home (whether real or imagined, it's never made clear) and nightmares of an eternity in the combat-ravaged jungle that shutters on through the second half of the film, a phantasmagorical fever dream that dissolves as sunlight breaks through the trees, and CANOPY's climax mounts.

CANOPY is a brief, strange film. It engages with many of the classic war movie themes: the immense purposeless of war as seen through the eyes of an individual soldier, the way that same soldier's habituation to warfare begins to turn his once-automatic humanity deliberate, and the bright memories of peacetime that stoke the dying fires of a will to deliberation.

The image of the jungle canopy as a stoic thing, now stage to a war, but inherently indifferent, is concretely communicated, but as the film moves into more psychological territory, Wilson's visual approach feels a bit too staid, the cuts and framing too clean.

As Jim rests his head against the bark of the sheltering tree and falls into tormented sleep, the director seems to be communicating that for as much as the jungle is indifferent, it is also host to an infection, that the ash of burning homes and the blood of the fallen have seeped into the Earth, and that the Earth is unconsciously broadcasting those horrors out through roots and through leaves and through the smooth bark of the tree against which Jim laid his vulnerable head... the photosynthesis of violence into nightmares.


But I'm not sure about any of that... because while CANOPY brushes the abstract, toying briefly with the relationship  between reality and dreams, I often felt that, for the originality of his vision - for a war film that is so compact and quiet and reverent to its characters' fear - it's a bit overly safe. A bit not quite original enough. (3 out 4 Stars)
Posted by Matt Finley at 8:32 PM