*** WARNING – depending on your point of view, there may be a SPOILER in this review. Although we here at the Cleveland Movie Blog try our best not to ruin movies for our readers, sometimes it's necessary to talk about certain plot points in order to explain why we liked or disliked aspects of the film. Read on at your own risk. *** 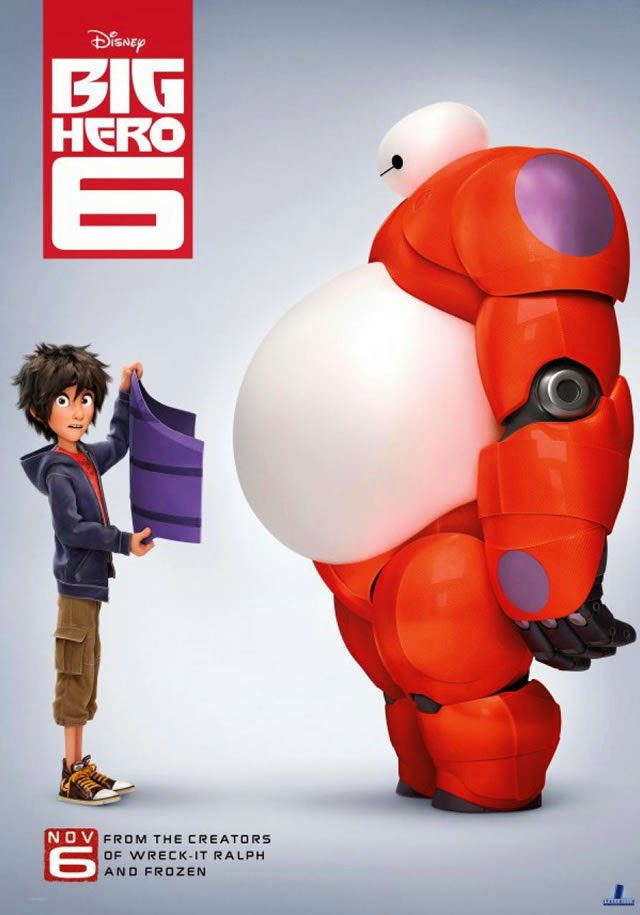 Last year Disney's FROZEN taught a whole generation of kids to sing “Let it Go” at the top of their lungs. This year, those same kids will learn that a robot can be as cute and cuddly as any talking animal. They may not know it yet, but after BIG HERO 6 opens this weekend, they're all going to want a Baymax doll under the tree.

This is what happens when a giant mega corporation not only owns half of everything cool in pop culture, it also knows how to make those elements work together. Starting with a Marvel Comics super hero team even more obscure than the Guardians of the Galaxy as raw source material, an army of Disney and Pixar veterans have reshaped what were frankly kind of throwaway characters into the next big thing. If only they had figured out a way to incorporate the Muppets and STAR WARS.

That said, the promotional tag that this movie is "from the creators of WRECK-IT-RALPH and FROZEN" seems a bit disingenuous. None of the writers (Don Hall, Robert L. Baird, Daniel Gerson, and Jordan Roberts) or directors (Hall and Chris Williams) of BIG HERO 6 contributed to the writing or direction of either of those films, and the creators of the comic book characters it's based on certainly had nothing to do with them, either. "From the studio that brought you," seems a more appropriate declaration. But I digress.

BIG HERO 6 is set in the fictional city of San Fransokyo, where rebellious teen genius Hiro (Ryan Porter) squanders his intelligence designing robots for illegal bot fights in which he hustles the other combatants. Hiro's brother Tadashi (Daniel Henny) finally convinces his sibling to apply for the same advanced college program he and his friends - Fred (T.J. Miller), Go-Go (Jamie Chung), Honey Lemon (Genesis Rodriguez), and Wasabi (Damon Wayans, Jr.) - are part of.

First, however, Hiro has to impress Professor Callaghan (James Cromwell) at the science fair. This he does with an invention he calls microbots, tiny little robots that, when combined with more of their kind, can be used to make just about anything one can imagine.  Everything seems to be going great for Hiro when a fire breaks out at the science fair. Tadashi runs back inside to rescue the Professor, but neither of them makes it out.

Before his death Tadashi had been working on Baymax (Scott Adsit), a soft and cuddly medical robot. When Hiro learns that his microbots are being mass produced by a mysterious man in a Kabuki mask for nefarioius purposes, he outfits Baymax in battle armor and sets out to get to the bottom of the mystery. Eventually Hiro realizes he can't go it alone, so he recruits his brother's former classmates, who all easily modify their own inventions into makeshift super powers. But Hiro has some anger and grief issues to work through, and the newly minted super heroes won't be much of a match for kabuki guy if they can't learn to work together as a team.

What differentiates BIG HERO 6 from all the other super hero movies filling multiplexes is its focus on character and emotion, a gentle and witty sense of humor reminiscent of Pixar at its best, and just enough tweaking of genre conventions to give a feeling of freshness to what is frankly a pretty typical super hero plot. There are also some nice themes about the danger of seeking vengeance, and how intelligence and compassion can sometimes be more effective at saving the day than big property destroying slug-fests (although make no mistake, the film still has plenty of the latter as well).

And then there's Baymax. In the comics, the character is a robotic green dragon. Not especially cuddly. For his film incarnation, he's been re-imagined as an adorable balloon bot. You can't help but want to give him a hug, even after Hiro outfits the chubby marshmallow with red armor. Interestingly, the seemingly unusual design of the character is based in reality. No full size version exists as of yet; just a robotic arm which served as inspiration. But chances are Baymax will only be science fiction for a little while longer. Parents, start saving up now.

Are there problems with BIG HERO 6? Sure. Chief among those, a particular trope almost every Marvel film uses in which a character seemingly sacrifices themselves only to have it turn out that, hey, they're really okay at the end. And while it's great that the film gives us a couple of strong female characters, neither of whom are in the film to be rescued and/or provide romantic interest for the male lead (we can talk about why there are still so few action films with female leads another time), it gets kind of obnoxious having one of them repeatedly say, “woman up”. I hate catch phrases in general, but this feels one step away from the Spice Girls shouting, “girl power!”

But hey, these are minor gripes for such a fun, genuinely uplifting work of mainstream corporate entertainment. BIG HERO 6 may even be better than THE LEGO MOVIE, which up til now was the undisputed animation champion of 2014. Plus it will be a lot less painful stepping on a Baymax plushie than one of those damn blocks when I'm stumbling around the mess in my living room in a holiday daze on Christmas morning. 3 ½ out of 4 stars.
Posted by Bob Ignizio at 12:00 AM