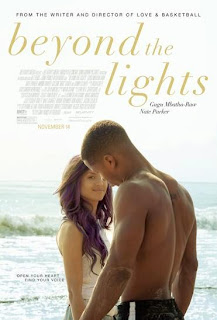 A preview screening of BEYOND THE LIGHTS opens with a brief, sincere speech by writer-director Gina Prince-Bythewood welcoming audiences to her first film since 2008, and asking people to tell their friends about it. It's an unusual thing to do, but Prince-Blythewood is an atypical filmmaker. A former TV writer and director (A Different World, among others), she directed feature films including cult favorite LOVE & BASKETBALL (2000), about a romance between high-school basketball players, and THE SECRET LIFE OF BEES (2008). Her narratives are psychologically complex, often involving parent-child struggles the filmmaker says emanate from her experience as a biracial adopted child. “I just think it makes for better writing when you're coming from a real place,” she told an interviewer. Her films are woman-centric, extending even to employing mostly female key crew members.


For the musical drama BEYOND THE LIGHTS, Prince-Bythewood wanted to explore what happens to an aspiring singer who gets caught up in the glitzy, paparazzi-plagued, hyper-sexualized world of commercial pop music. It wasn't easy for Prince-Bythewood to get the film made. She started working on it in 2007, before BEES, but struggled to find financing after Sony, the original production company, withdrew. One reason was Prince-Blythewood's insistence on casting in the lead role Gugu Mbatha-Raw, a stunning actress of biracial South African and English parentage. As it happens, Mbatha-Raw is one of the best things about the film.

Macy Jean is furious when Noni wins only second place. “Chuck it,” she commands Noni, ordering her to throw her hard-won little trophy on the ground. “You want to be a runner-up, or a winner?” Noni's British background, and her working-class Caucasian single mom, so zestily portrayed by Driver, impart an interesting flavor to the story, so it's disappointing when the setting shifts to contemporary L.A., where we find that the English schoolgirl who likes to sing the blues has become the sexy, purple hair-weaved, stiletto-heeled commodity Noni (Mbatha-Raw). She's gorgeous but, with gold collar and chains, skin-tight outfits and other S&M-style accoutrements, also ghastly.

Noni, who is on the cusp of music superstardom, receives a Billboard award for her vocals on a recording by rap star Kid Culprit (Cleveland musician Machine Gun Kelly, who is no actor but convincing as the white rapper he is.).

Back in her hotel room, Noni orders her entourage to leave her alone and takes a hasty plunge off the balcony. Security guard Kaz Nicol (Nate Parker) rescues her. As he is pulling her back inside, their eyes meet. Kaz can see the hurt little girl in the superstar. “Nobody sees me,” laments Noni, and he assures her that he does.

Kaz is a police officer being groomed for a political career by his father (Danny Glover). His life is changed by his encounter with Noni. He is drawn into her life of recording sessions, paparazzi camera shutter clicks, sexy photo shoots, and overbearing mother-manager. Noni is drawn to Kaz because he represents the normal life she has been denied. One night, she jumps in a car with him and they share fried chicken while watching planes land at the airport. Kaz's efforts to get help for Noni fall on her ambitious mom's deaf ears. Noni's suicide attempt is explained to the public as an accidental fall.

The story is meant to be about Noni (think Rihanna or Beyoncé) finding her authentic voice, and self, beneath the makeup, extensions, nails, costumes, suggestive videos and stage show, and elaborate sound production that represent much of what's wrong with the pop music of today. One of the film's most satisfying moments is when Noni, who has stolen away with Kaz to Mexico, removes her hair extensions, revealing the cute girl whose kinky hair so confounded her mum all those years ago. It's a “Cinderella-in-reverse” transformation that speaks eloquently about what constitutes beauty.

The narrative focuses primarily on the romance, which is less interesting than the relationship between mother and daughter. By jumping from Noni's childhood to superstardom, we miss some crucial data. How did the little singing schoolgirl get to be this sleazy-imaged superstar? Late in the movie, we at last get some insight into Macy Jean. “You think it was easy for me, raising a black baby?” she says. “I was all alone! It was you and me against the world.” If only the film gave more attention to this compelling stage mom, Brixton's answer to Mama Rose.

Nate Parker (THE GREAT DEBATERS) doesn't gets to flex his acting skills as much as his muscles. This being a woman's movie, Kaz is rather recessive, and often called upon to be shirtless. It's hard to understand regular-guy Kaz's attraction to the troubled, spoiled celebrity; supposedly he can “see” her true worth beneath the glitz. Even so, would this level-headed cop stride out onstage and punch Kid Culprit during a live TV awards show, or make out with Noni onstage during her homecoming concert in London? Or, for that matter, respond to a domestic violence police call without any weapon or backup? Logic is not this film's strong suit. Nor is pacing: Prince-Bythewood directs at a languid tempo that makes the 116-minute film seem longer.

The film is very good, however, at capturing the peculiar cacophony of this rather debased segment of show business, down to the specific looks of the clothing, the press hordes and the mindless TV coverage and the sounds of the music and the cameras' incessant clicks.

Unlike its heroine, the film doesn't quite achieve its artistic ambitions, but it is a worthy effort, and Prince-Bythewood remains an interesting filmmaker. 2 1/2 out of 4 stars.