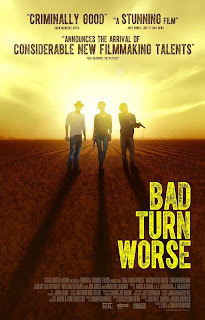 Even if one of the characters hadn't quoted Jim Thompson, it would be obvious that BAD TURN WORSE was inspired by the Texas pulp crime writer responsible for such gritty classics as 'The Grifters', 'The Killer Inside Me', and 'After Dark, My Sweet'. Like the characters in Thompson's novels, the protagonists in Simon and Zeke Hawkins' film are ordinary people who get caught up in a web of sex, violence, and crime, and there's little hope that things will well for any of them.

The film's plot turns on a classic love triangle. Mystery buff Sue (Mackenzie Davis) is ostensibly the girlfriend of B. J. (Logan Huffman), but she has far more in common with B.J.'s friend Bobby (Jeremy Allen White). Both Sue and Bobby are planning on leaving their one horse Texas town for college, something that isn't even remotely an option for the less intelligent B.J. His most ambitious plan for the future is to steal $20,000 from his and Bobby's shady boss Giff (Mark Pellegrino) so he, Bobby, and Sue can have one heck of a night out.

B.J. prides himself on being street smart even if he isn't book smart, but it turns out he's lacking in both departments. Giff easily discovers the theft, and when B.J. And Bobby show up the next day they find their boss pointing a gun at the Mexican guard who was supposed to be keeping an eye on his money. The man has clearly been beaten already, and when Giff starts in to kicking him, Bobby decides to cop to the theft to put an end to the violence. That doesn't go so well, and as one might expect, things aren't looking too good for Bobby and B.J. at this point either.

Giff of course wants his money back, but it's long gone. Not believing Bobby could have gone through such a large amount on his own, Giff pressures B.J. to admit to helping spend the cash. And just to make sure that everyone is screwed, B.J. throws Sue under the bus for good measure, telling Giff that she too was there helping to run through the twenty grand.

Rather than kill the young men, Giff instead offers them a way out. They can perform another theft, this one of Giff's boss Big Red (William Devane). It sounds easy, and certainly beats being shot dead on the spot, but to quote part of the Jim Thompson quote from earlier in the film, “things are not as they seem.”

It's been a good year for gritty independent crime films, with COLD IN JULY, BLUE RUIN, and JOE all standing out in their own ways. BAD TURN WORSE makes a good effort to join their company, but ultimately falls a little short: it's not great, just good. It's just a little too obviously written and with a few moments that feel more forced to fit noir formula than authentic. It also doesn't have the guts to deliver as devastatingly bleak a climax as Thompson would have. But the performances are first rate, the story is gripping, and the brothers Hawkins give us enough nicely executed shots to make this one worth seeing on the big screen. 3 out of 4 stars.
Posted by Bob Ignizio at 12:26 AM