Walking the Camino (October 4th and 5th at the Cleveland Cinematheque)

[WALKING THE CAMINO screens Saturday October 4th at 6:45 pm and Sunday October 5th at 4:15 pm at the Cleveland Cinematheque.] 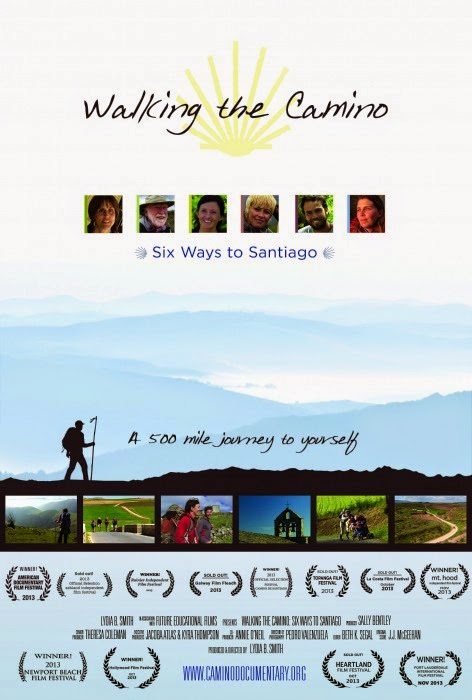 Four years ago, I attended a screening of The Way, a movie about a group of people walking the Camino de Santiago, starring Martin Sheen and his son, Emilio Estevez, who directed. Sheen and Estevez were in attendance, talking about the film and graciously answering questions. Estevez said he had originally considered making a documentary rather than a fictional film, and after seeing his well-intentioned but overly sentimental drama, I thought the documentary would have been the better choice.

A wonderful documentary on the subject was released just last year: Lydia Smith's WALKING THE CAMINO: SIX WAYS TO SANTIAGO. It's a superb account of the paths of six people of various ages and nationalities attempting to walk the ancient 500-mile Christian pilgrimage path in Spain, which has been followed by seekers for 1,200 years.

Walking the Camino is a spiritual exercise that requires considerable stamina and resolve, the ability to withstand heat, cold, rain and snow, foot and leg injuries, exhaustion, loneliness and other maladies. “It's not a stroll,” says a Spanish priest in the film. But accomplishing the grueling trek offers incomparable personal rewards. “It's not just about arriving at a place. It's a process toward the heart. It's an internal Camino.” Another says that walking the Camino is “pure medicine” that “opens new perspectives” and “heals the many hurts.” So eloquently do the people in it describe the joys and wonders of The Way, this film will likely inspire many more seekers to make the trek.

People of all cultures and religions choose to walk the Camino, and for all kinds of reasons: getting over grief, as a personal challenge, for adventure, to connect with nature. Tatiana, a devout French woman, says, “It's for God I'm here.” Tatiana has brought her toddler son, Cyrian and, reluctantly, her merry, nonchalant brother who, she complains, doesn't believe in God or take the Camino seriously, though he does make a playful companion for little Cyrian. “When you are walking, you love, more and more, God,” says Tatiana in her charmingly Gallic English. Sam, from the UK and Brazil (somehow), needed to change her life after getting fired and ending a relationship with an alcoholic. She bleached and cut her hair and decided to empower hersself by walking the Camino.

A seventyish widower from Canada, Wayne is on the path with his friend, Jack. Wayne is seeking communion with nature and a new path after losing his wife; he is sidelined briefly by a virus, but he and Wayne return to the long trail, determined to finish. A young man named Tomás is besieged by blisters and intense knee pain, but continues bravely, hobbling much of the way. Tomás' aim is not specifically religious, but near the end of his journey he reflects, “If this journey changes you, it is in itself spiritual.” A woman from South Korea named Martha says walking the Camino gave her the courage to express her love to her husband. “On this Camino, I can do anything. I can be brave.”

The pilgrims form intense bonds on their journeys; a spirit of helping is encouraged by the inns, cathedrals and hospitaleras that serve the pilgrims on the path. One of the pilgrims Tomás has befriended leaves him his good shoes when he leaves the path. A taciturn German walker carries Annie's heavy backpack for her, an act of kindness that moves her to tears. Misa, from Denmark, planned to walk alone – it's hard, she says, to find anyone who can walk at her fast pace – but found herself partnering with easygoing William, a Canadian ten years her junior who not only keeps up with her, but becomes her romantic partner. An American named Annie, who's going it alone, has some painful moments watching much faster walkers outpace her. “It's ingrained in me to be competitive,” she laments. After some painful soul-searching, she allows herself to walk at her own pace and appreciate the considerable beauty of the path's magnificent scenery, which is captured splendidly by Pedro Velanzuela's excellent cinematography. 4 out of 4 stars.
Posted by Pamela Zoslov at 12:54 AM