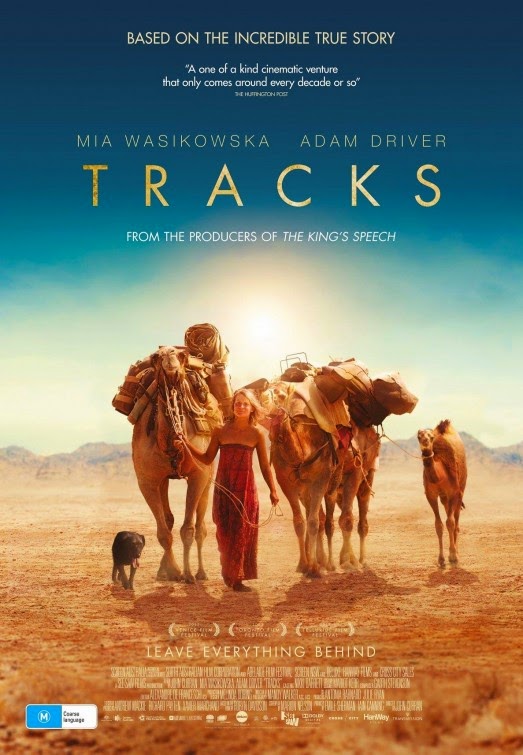 It took decades for Robyn Davidson's Tracks to reach the screen. The book, a memoir of Australian writer Davidson's 1,700-mile trek across the deserts of west Australia in 1977, is extremely popular, especially among women, who apparently like Davidson's determination to make her journey on her own, accompanied only by her faithful dog and four camels to carry her gear.

Attempts to make a movie of Tracks, with Julia Roberts or Nicole Kidman, began even before the leading actress in the present film, Mia Wasikowski, was born, as pointed out on the imdb movie website. The film was directed by John Curran, who made a pleasing version of Somerset Maugham's The Painted Veil, and features extraordinary cinematography by Mandy Walker that embraces the rugged beauty of the Australian outback.

Marion Nelson's screenplay makes liberal use of the book's narration. Robyn Davidson (Wasikowski) describes herself as a nomad who is “at home nowhere.” Bored of city life and the self-indulgent ways of her class peers, Robyn explains, “I've always been drawn to the purity of the desert.” It is solitude, or what she calls privacy, that she seeks.

The film portrays Robyn as a complex, somewhat prickly character, more at home with animals than with people. In flashbacks, we see the childhood trauma that shaped her: her mother committed suicide and her father, unable to care for her, packed her off to live with his sister. Then as now, her affections were reserved primarily for animals; the pain of the memory is centered on her lost, beloved childhood dog.

Robyn's father was an explorer as well; his wanderlust stoked her determination to make the impossible-seeming walk from Alice Springs to the Indian Ocean – a journey that would take nine months. Before setting out, Robyn apprentices herself to a series of camel trainers, in order to learn about and acquire a few of the feral camels that roam western Australia (they were brought there during 19th-century colonization and released after being replaced by motorized transport). Though the camel trainers betray her, Robyn learns to relate to the magnificent, growly, beautifully ugly dromedaries. She acquires four: Dookie, Bub, Zeleika and a calf, Goliath.

Robyn sets out with her camels and her faithful dog, Diggety, but is beset by the humans she can barely tolerate. A group of friends arrives to camp out with her, and one of them brings along Rick Smolan, a travel photographer who helps her get National Geographic magazine to finance her trip, on the condition that she write an article and Smolan take the photographs.


Robyn is profoundly irritated by Smolan and his clickety-clicking Nikon, but knows his chatty presence is the price of her trip. Adam Driver, wearing shaggy late-'70s hair and wire-rimmed glasses, plays Smolan, who becomes Robyn's foil, friend and occasional lover. Great care has been taken to depict the scenes as they were photographed by the real Rick Smolan in National Geographic in 1978.

Robyn encounters a number of interesting aboriginals along the way. Mr. Eddy (Roly Mintuma), a respected aboriginal elder, serves as her guide on a difficult portion of her trek. She relates much more intimately to the aboriginals, whose language she doesn't share, than to people from her own world. Davidson is, in fact, a self-taught social anthropologist who has made a career of traveling with and studying nomadic peoples.

A disclaimer at the beginning of the film warns that aboriginal people might be upset by photographic images showing deceased relatives; a similar warning could be issued to animal lovers, who might recoil at the fates of some animals in the film. But, the incidents are based on true events, and they are sensitively handled.

The film revels in the landscape and in the relationships between Robyn and her dog and camels. Some might find the lengthy depiction of the “Camel Lady” walking across the desert a bit tedious. That contemplativeness, enhanced by a beautiful score by Garth Stevenson, is entirely the aim of this lovely film. 3 1/2 out of 4 stars.
Posted by Pamela Zoslov at 12:00 AM