The Phantom of the Opera, at the home of the Cleveland Orchestra (who will stand you up), October 28 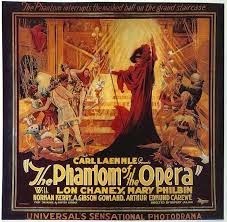 It's rather amazing that nobody has, to wide knowledge, floated the urban legend that Severance Hall is haunted. As I wrote in my book Cleveland Ghosts, plenty of public performing auditoriums get extra patronage (not to mention overnight rentals from ghost-hunting tourists) via rumors of specters or phantoms lurking about. Perhaps there just isn't enough money left here to pay a decent "haint" to hang around the Cleveland Orchestra's main venue.

In fact, ever read the original Gaston Leroux novel The Phantom of the Opera? It's an amusing bit that the novel's "Opera Ghost" - actually a living, mortal mad genius-hermit with grotesque congenital deformities - dwelling beneath the Paris Opera House, routinely sends anonymous letters to Opera management that often dictate the "ghost's" extravagant salary demands. I'd like to see some ghost try to get away with asking for heaps of money in today's flatline Cleveland economy.

(Then again, in University Circle, it probably could get away with it - if the ghost was well-connected to the Democratic Party and/or had an aggrieved LGBT/racial-minority card to play to all those liberal arts-committee members. Gotta promote "workplace diversity," you know. What would Mao think?)

I think that salary demand made its way into Andrew Lloyd-Weber's stage-spectacular The Phantom of the Opera, which is generally faithful to the Leroux literary thriller. And so is the illustrious 1925 Hollywood adaptation THE PHANTOM OF THE OPERA, starring Lon Chaney Sr. in the frightfully effective skull-faced, high-cheekboned makeup of his own design that brought the character to life. It was one of a silent-era series of high-profile Chaney vehicles that linked Universal Pictures with quality horror, sci-fi and fantasy motion pictures for most of the next 100 years.

Come see 1925's THE PHANTOM OF THE OPERA, still creepy and lavish, in the one venue in Cleveland where it actually could have happened (except for the Phantom's wages campaign; see above), Severance Hall. The feature - with its famous two-color Technicolor sequence in which the Phantom makes a public appearance as the Red Death - will be projected on the big screen on Tuesday, Oct. 28, at 7:30 p.m.

This is a Halloween special, part of an "At the Movies" series, begun in late 2012, in which the mighty Cleveland Orchestra loosens up its black tie a little bit and performs soundtrack accompaniments to great films, with silent-era immortals and Hitchcock among the past attractions.

One disclaimer, though. The Cleveland Orchestra will not perform this time alongside PHANTOM OF THE OPERA. Master keyboardist Todd Wilson, at Severance Hall's concert organ, will be the solo musician this time. Which is faithful to how a lot of silent movies were serenaded in the old days, before THE JAZZ SINGER ushered in talkies, but which also fits my theory about no money around here left to pay anybody. LeBron got the last of it.