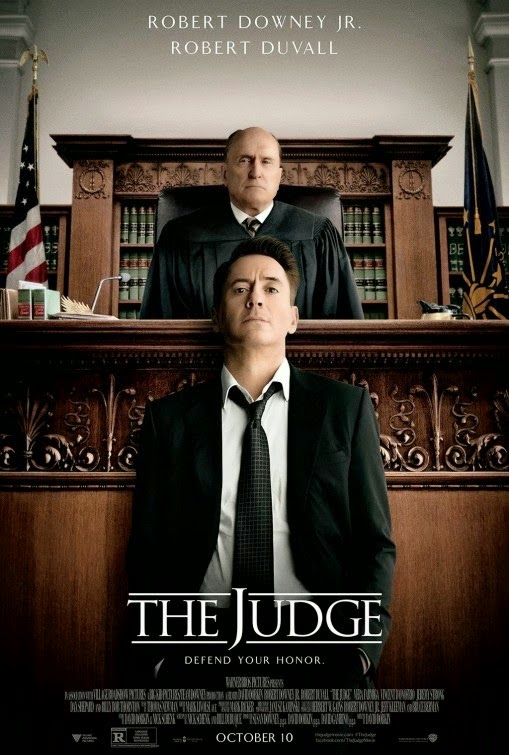 To call THE JUDGE a courtroom drama isn’t totally fair though. Most of the drama revolves around a broken family, the Palmers. Son, Hank Palmer, played by Robert Downey Jr., is a big-city lawyer who thrives on defending society's most corrupt. His father, Judge Joseph Palmer (Robert Duvall) has presided over a small town in Indiana for over four decades. Unlike his son, Judge Palmer is guided by principle. While both father and son have turned to the law in their professional lives, the bonds that tie them together as family had been severed for years. Hank calls his father “Judge” as lovingly as a military recruit calls his superiors “sir.”

When Hank finds out his beloved mother has passed, he is forced to return to his childhood home. The visit for the funeral is short and cold; Hank is ready to leave without mending any fences. Before he leaves town he receives a call that his father is being brought up on murder charges in a hit and run. So Hank stays, just in case Judge Palmer decides to use his son for defense. At first Judge Palmer refuses to use Hank, opting for a country bumpkin lawyer with ethics, C.P. Kennedy, played nicely by Dax Shepard (PARENTHOOD, IDIOCRACY). Eventually, though, even Judge Palmer knows that he needs the most capable lawyer as evidence steadily stacks against him.

The premise is good enough to expect high-drama. Sadly, THE JUDGE is far more interested in Hank’s crippling relationships (father, brother, ex-girlfriends, soon to be ex-wife, daughter) than in the legal drama. The movie would have been best served focusing on the father-son relationship.  At well over two hours, THE JUDGE lingers on storylines that feel insignificant. Particularly Hank’s flirtation with ex-girlfriend Samantha (Vera Farmiga ). It’s an “eh” side- story that never feels exciting.

The movie reveals certain family issues that also play into the court case. But often times in the movie, a major development in the case is only made known to the audience as the trial is happening.  In time we learn the victim has a darker history with Judge Palmer, only complicating the case further. It’s a shame that the film puts as little emphasis on the case as it does. The writers came up with a unique hook (lawyer son defends dad who is a judge), then let it float around for a couple of hours without ever fully committing to what it is the film wants to accomplish.

Despite the fact that Downey and Duvall play pretty unlikable guys, both deliver respectable performances, particularly Duvall. Duvall displays a full control over a complex character, from noble judge, stern father to an ailing old man. Downey sticks to his ‘cooler than you’ shtick that we know so well from IRON MAN, and while it doesn’t feel new, it fits the role. Billy Bob Thornton also appears as a prosecutor ready to match Hank’s courtroom prowess. Thornton plays it low key, which works perfectly in the movie. Vincent D’Onofrio also does a solid job as Hank’s brother, a man with a complicated past still stuck in Indiana.

THE JUDGE doesn’t seem to aspire to accomplish much. It doesn’t challenge the audience with new ideas or clever writing. And it often resorts to cliché. Regardless of the movie’s shortcomings, it’s not fair to totally bash THE JUDGE. The movie is harmless entertainment. My mom quite enjoyed it, particularly the performances. THE JUDGE is neither worth getting excited about or upset about. It feels like we’ve been here before and there’s worse places to be.
2 1/2 out of 4 stars