Street of Shame (November 1st at the Cleveland Cinematheque)

[STREET OF SHAME screens Saturday November 1st at 5:00 pm at the Cleveland Cinematheque.] 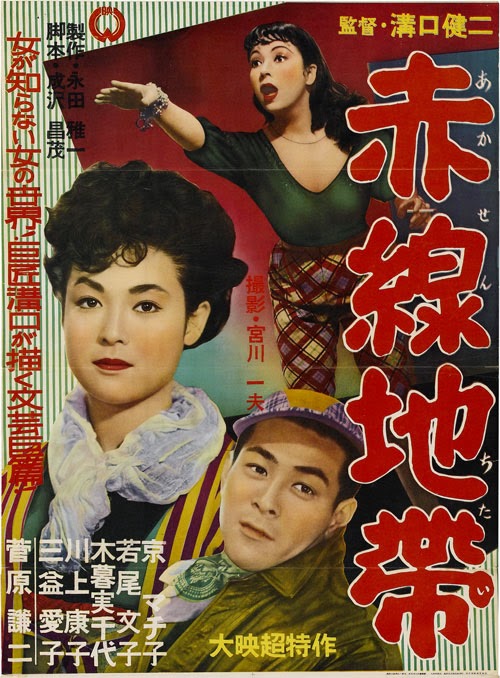 Pic's entitled STREET OF SHAME, huh? Is it about Euclid Avenue, Superior Avenue or St. Clair? Maybe W.6th Street or one of those other regrettable Warehouse District thoroughfares. Merwin Avenue, Columbus and some of the other streets in the Flats certainly have shame. But it probably would take up more than one movie.

No, this is not a Cleveland production but actually a 1956 Japanese drama about modern geishas. I didn't see MEMOIRS OF A GEISHA, though I read the Arthur Golden source novel (and think I recognized a few people I used to know in it). But I've never found Japanese geisha girls the incredibly enticing sexual beings that western culture (and Gwen Stefani and other pretentious pop-music sirens) have made them out to be. Sorry, those weird costumes, stiff-looking hairstyles and white face paint? Guess it's a Japanese thing; we Earth people wouldn't understand (well, maybe tattoo artists Ed Hardy and Sailor Jerry, but that's it).

STREET OF SHAME won't make viewers want to become geishas either (then again, if Critic-Know-It-All statements like that were true, heroin use would have dried up after REQUIEM FOR A DREAM came out). The straightforward, realistic drama was the final work from director Kenzi Mizoguchi, considered a most insightful filmmaker when dealing with women's issues. Then again, I am given to understand that any male in Japan who saw females as any more more than somewhat annoying articles of furniture was most insightful about women's issues. Mizoguchi died of leukemia the year of this film's release, and I leave it to more learned types to discuss whether that sense of morality and accountability pervaded what is onscreen.

Setting in Tokyo's Yoshiwara district, home of the Japanese sex trade for three centuries [okay, I just lost most of the readers of this site, who have just gone to Google "YOSHIWARA DISTRICT CHEAPEST AIRLINE RATES"; sorry, Mr. Ignizio].

As the story begins, a new anti-prostitution bill has the denizens seriously concerned. The narrative follows five prostitutes at a bordello called Dreamland. One of the hookers is earning money to support her sick husband (he suffers from tuberculosis, which is as bad as leprosy in Japanese culture (then again, just about anything that makes one different is as bad as leprosy in Japanese culture (you can tell I'm not a Japan fan (even though I use a lot of their brand-name electronics (blame America for dropping the ball on microcircuit manufacturing)))). Another woman, a widow, is putting a son through school - and when he reacts with outrage at his mother's profession, she kills herself.

The females aren't all ennobled and self-sacrificing saints either. One mercilessly teases a lovestruck client with promises of marriage, making him steal from his boss to afford her. Another is a young runaway, who defiantly flaunts her sex appeal at her own father. We see Miley Cyrus in the American remake, definitely.

Gone are most of the classic geisha affectations, just the occasionally lingering obi or yakuta gown, in a deglamorized portrait of latter-day eastern concubines far from the Madame Butterfly model. Mizoguchi manages to make his points without graphic sex and sleaze, and the acting and characterizations are on the mark. The women's pimp claims that he looks closely after the women's welfare, supposedly the reason the law tolerates the red-light district in the first place. But what develops indicates otherwise, a pattern of exploitation of women by parasitic men.

Of course, this is the pre-feminist era; nowadays it's the other way around, of course. Conclusion: guys, don't patronize Nippon's prostitutes. You're just contributing to their degradation. And, nowadays, risking radiation poisoning. (3 1/4 out of 4 stars)