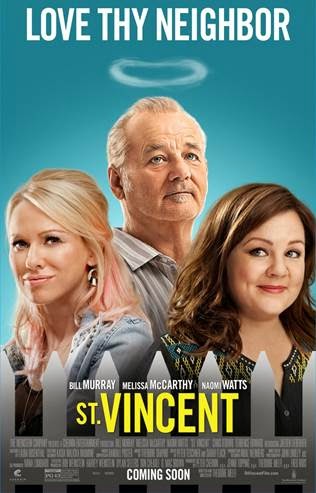 It wasn’t easy for first time director Theodore Melfi to find the star of this film – Bill Murray. Near impossible, really. In an interview with USA Today, Melfi described how difficult it was to reach Murray, who has no agent or manager. “You call a 1-800 number,” says Melfi.

Weeks of unanswered messages later, the hopeful director called Murray’s lawyer. “What number do you got?” the lawyer asked. “The 800 number.” “Well that’s what I got,” said the lawyer. He recommended snail mail. Melfi obliged. After months, Murray set a date to talk about the ST. VINCENT script with Melfi.

After a long drive in a town car around an Indian reservation, Murray agreed to do ST. VINCENT. The lengths this filmmaker went through to get Murray onboard only makes you appreciate the rare event of a Bill Murray film hitting the theaters more. (Outside of his assumed appearance in any Wes Anderson film, of course.)

ST. VINCENT is a simple film. Vince (Bill Murray) is a tired, grumpy old man in Brooklyn, New York. His unlikely sidekick, Oliver (the terrific Jaeden Lieberher), is new to the neighborhood. Vince, who feels perpetually inconvenienced by life, agrees to look after Oliver when the boy’s mom (Melissa McCarthy) works long hours at the hospital. The babysitting money will help Vince – an excessive gambler and drinker – pay his debts with his bookie Zucko (Terrence Howard) as well as a nursing home, where his wife suffering from dementia resides.

Vince and Oliver are a truly endearing duo. Vince’s gruff exterior softens towards the boy – he teaches him to stand up to bullies at school, and how to break a nose. Oliver politely observes Vince’s bets at the horse track, and meets Vince’s “woman of the night” Daka (Naomi Watts).

ST. VINCENT benefits from excellent casting. Melfi’s tenacious pursuit of Murray is well worth it. Murray steals every scene. He is interesting, and hilarious. Few people can do so little on screen and show so much. Melissa McCarthy is also at her best – sincere and funny. And for once, there’s no zany edge or unlikable psycho affectations (TAMMY, THE HEAT and IDENTITY THIEF). She seems more herself in this quirky and heartfelt story.

The charm of this story will have you rooting for all the characters on screen. The struggles of Vince, Oliver, and Maggie represent three stages of the human life cycle – young and feeling like an outsider, middle-aged and feeling overwhelmed, and being older and set in your ways. It makes the story relatable and genuine.

ST. VINCENT, considered a comedy, doesn’t shy away from serious moments or tragedy. There are moments of jubilation, laughter, heartbreak, and inspiration – but never a cliché. Murray is a master in the art of balancing comedy and sadness, and he delivers here. Few actors in the history of cinema have had the natural talent to be instinctually funny and at the same time look so unbelievably melancholy. I am admittedly a huge fan. When Murray speaks, I listen. RUSHMORE, GROUNDHOG DAY, ED WOOD, WHAT ABOUT BOB? And GHOSTBUSTERS are some of my all-time favorite films.

ST. VINCENT doesn’t join the ranks of the previously mentioned films. It falls somewhere between BROKEN FLOWERS and GET LOW (both fine movies). It doesn’t have a strong, consistent style and it jumps around a bit, but the film has charm to spare and the cast is wonderful. Plus, you get to see Murray sing Bob Dylan’s “Shelter From the Storm” as he sits in a lawn chair and waters a dead flower. An icon in his element.  3 out of 4 stars
Posted by Joseph Anthony at 12:00 AM