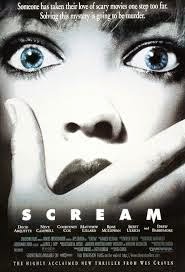 Directed by onetime NE Ohioan Wes Craven (who, unlike LeBron, never came back) and written by hot scriptwriter Kevin Williamson, who captivated TV viewers with the juvenile ensemble cast of the drama Dawson's Creek, SCREAM was a monster hit when it premiered on an unlikely date, Christmas time 1996. Really folks, I cannot begin to guess how many movie executives got to divorce their aging wives and marry their daughter’s skanky BFFs based on the largesse accrued by this one movie. It inspired three sequels, a carbon-copy parody film series, and even a tradition (blessedly rather short-lived) by Disney-spinoff distributor Dimension Pictures to unwrap fresh horror entries each successive jolly holiday season (THE FACULTY, DRACULA 2000, etc.).

It - SCREAM, that is - brought a sharper level of intelligence, production values and acting talent to a disreputable (but to adolescent and post-adolescent viewers, irresistible) genre that exploded in ticket sales almost 20 years earlier - the teen-slasher horror film. Almost always R-rated and crudely-plotted, the breed is exemplified by the original HALLOWEEN, FRIDAY THE 13TH and Xeroxed by countless low-budget and tacky imitators (TERROR TRAIN, PROM NIGHT etc.).

Williamson, aided by Craven, had the great idea not only to write SCREAM on a smarter level - it's a cunning “whodunit” with Agatha Christie twists - but also set it amidst movie-savvy protagonists. These SCREAM players have seen that slasher-movie slop, and they know (or think they know) the tricks. One boy is even a video-store clerk who spells out "the rules" of horror films to try and predict what's going to happen next. Fun trivia: on obscure video racks you might find THERE'S NOTHING OUT THERE, a 1991 cheapie spoof about a killer alien, in which there's a practically identical character. I cannot tell you whether any lawsuit or quiet Dimension Pictures payoff resulted.


SCREAM’s opening pays tribute to WHEN A STRANGER CALLS, as menacing phone calls torment a girl, played by Drew Barrymore. The voice belongs to a robed and masked psychopath, who viciously slices his prey and leaves her hanging from a tree. Slaying A-list starlet Barrymore immediately and pitilessly is just the first curveball the filmmakers throw.

The maniac's real target is Sidney Prescott (Neve Campbell), a high-schooler whose own mother (described as a tramp) was raped and murdered exactly one year before. Sidney barely survives an attack herself by the hooded marauder. This renewed bloodletting creates a media sensation in Sidney's small town of Woodsboro, and brings a visit by tabloid-TV journalist Gale Weathers (Courteney Cox), whom Sidney already knows and detests.

Then again, a lot of the characters here are detestable. Craven and Williams do a good job etching teen subculture, but give very few of these endangered kids redeeming features. Instead there's the nihilistic sense of jaded, horror-movie-loving teens who are smart but desensitized and mean. The one grownup who launches into a righteous, outraged tirade about the kids’ morals soon gets skewered himself by the maniac (it’s hinted that he’s a hypocrite anyway), and the young people celebrate his demise with a beer blast and viewing party of John Carpenter's HALLOWEEN. Meanwhile the murderer gets especially busy and Sidney faces her worst fears.

Funner trivia: SCREAM was originally begun under the title "Scary Movie," but the studio changed it. That tag was subsequently adopted by the subsequent parody SCARY MOVIE and its own downtrending sequels. The first SCARY MOVIE nearly received an NC-17 rating itself for vulgarity. Meanwhile, the MPAA was out tagging harmless SHREK sequels with PG. Sometimes the behind-the-scenes decisions and dealmaking of showbiz are more frightening than the knife-wielding madmen onscreen. (3 1/4 out of 4 stars)