Repost: Kuroneko (October 23rd and 24th at the Nightlight Cinema in Akron, OH) 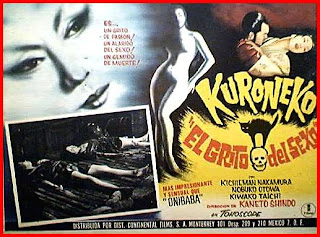 Much of the action in KURONEKO takes place in the vicinity of Rajomon gate, perhaps better known by its alternate spelling of Rashomon from the Akira Kurosawa film of the same name, and the short story upon which that film was based. According to Wikipedia, this particular gate had a rather unsavory reputation, and in Kurosawa's film was meant to represent, “the moral and physical decay of Japanese civilization and culture”. That would appear to be the case here, as well.


KURONEKO begins with a particularly brutal example of this moral decay. Not far from Rajomon, a group of hungry samurai come upon the grove where Yone (Nobuko Otowa) and her daughter-in-law Shige (Kiwako Taichi) live on a small farm. The samurai steal food from the women, rape them, and set their home on fire, leaving them inside to die in the flames. After all, as samurai leader Raiko (Kei Sato) says later in the film, peasants and farmers are less than human. But Yone and Shige become more than human after their deaths, returning as Onryō ghosts, a particular kind of Japanese revenant that can take physical form to wreak its vengeance.

As anyone who has seen JU-ON or RINGU can tell you, the vengeful spirits in Japanese ghost stories aren't always particular about who they wreak their vengeance on. Innocents often get harmed, and the guilty sometimes escape punishment. This may seem strange from a western point of view. We're used to the EC comics tradition in which only the deserving are punished by the avenging undead, usually in some ironic fashion. Here, the less deserving victims at least make thematic sense. Any samurai is fair game, because the women's vengeance is directed not just at those who harmed them, but the cultural institutions that helped forge such men. This creates genuine tension and suspense when Shige's husband Gintoki (Kichiemon Nakamura) returns from war as a samurai himself. Right up until the film's thrilling and poignant conclusion, we're not sure whether love or vengeance will win out.

Director Kaneto Shindō has crafted a beautiful expressionist horror film here, with atmosphere and mood taking precedence over realism. His ghosts are as delicate and graceful as they are vicious, floating and tumbling through the heavily stylized sets and sporting exaggerated makeup like characters in a Kabuki play. Although shooting in color was the norm by 1968 when this film was made, Shindō opts for black and white as he did in his previous horror film, 1964's ONIBABA, further contributing to the film's aura of the fantastic. You rarely, if at all, find atmosphere like this in modern horror films. That it also comes with a strong, thematically rich story is even rarer. 3 ½ out of 4 stars.
Posted by Bob Ignizio at 12:00 AM