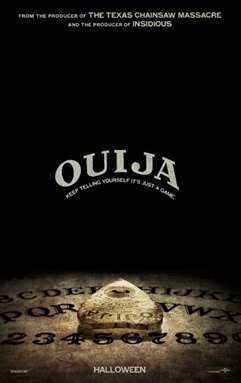 The malevolent forces in OUIJA are set in motion when high school student Debbie (Shelley Hennig) tries and fails to destroy the titular wooden board, believed by some to allow communication with spirits – and perhaps even other, more dangerous entities. Apparently it worked in this case, as Debbie winds up hanging herself with a string of lights after being possessed by who – or what – ever it was that she contacted with the board. It looks like a suicide, and Debbie's friends are shocked, especially her bestie Laine (Olivia Cooke) who was the last person to see Debbie alive.

After the funeral, Debbie's parents aske Laine to watch their house while they get a little distance from the site of their daughter's death. Of course she finds the board, and of course she asks the rest of Debbie's friends – Trevor (Daren Kagasoff ), Isabelle (Bianca A. Santos), Pete (Douglas Smith), and Laine's sister Sara (Ana Coto) – to come over and see if they can't get in touch with the recently departed. Do you really need to ask what happens next?

The script structure should be more than familiar to even casual horror fans. A group of high school kids, almost completely devoid of parental oversight, gets caught up with a supernatural peril. They must then race against time to find a way to save themselves as, one by one, the characters are picked off by the evil force they have unleashed. Old newspapers are dutifully searched and survivors of similar occurrences in the past now residing in asylums are visited in hopes of finding information. And whether or not anyone survives, you can be sure that somehow, some way, if the movie makes a profit, there will be a sequel.

OUIJA is formulaic, but it's effective. While it's very obviously slanted towards the teen and twenty-something market, the film takes a fairly serious approach to horror. I think the idea of Ouija boards being anything other than a game that works through the ideomotor effect (helpfully explained in the film via Youtube video) is laughable, but director/co-writer Stiles White handles the material well enough that he got me to suspend my disbelief for the duration. This being a PG-13 film the blood and gore are sparse, but there are some genuinely creepy manifestations and some good jump scares to be had. The only problem, and it's not an insignificant one, is that the script is utterly by the numbers. If you've ever watched more than a handful of horror movies, you'll constantly be two or three steps ahead. 2 ½ out of 4 stars.