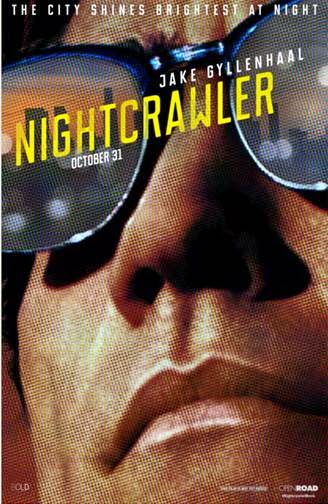 When we first meet Louis Bloom (Jake Gyllenhaal), the protagonist of NIGHTCRAWLER, he elicits our sympathy. He's a young, smart, resourceful guy who, despite a being down on his luck, genuinely wants to work. To make ends meet at the moment, he's collecting scrap metal, and not always by legal means. So even when he punches out a security guard who catches him stealing some chain link fence, we're still kind of on his side.

Eventually Louis discovers the twilight world of freelance late-night crime photography. After asking veteran cameraman Joe Loder (Bill Paxton) for a job and being brusquely turned down, Louis finds his entrepreneurial spirit, gets a cheap video camera and a police scanner, and goes into business for himself. Learning the ropes without anyone to teach him is rough, but eventually Louis starts to get footage that interests Channel 6 news director Nina Romina (Rene Russo). He also gets an “intern” willing to navigate while he drives, another down on his luck guy named Rick (Riz Ahmed).

As the film goes on, our initial sympathies for Loius start to fade. He lacks even the minimal level of ethics that guys like Joe Loder work under, allowing him to get especially grisly (and sometimes manipulated) footage that cements his exclusive relationship with Nina, a relationship that Louis would like to be more than just professional. But it isn't long before we start to realize that Louis isn't just some harmless, socially awkward goof, but a full blown sociopath willing to do just about anything to get what he wants. But just how far will he go?

Louis' pathological behavior and Nina's ratings obsessed enabling of it function as a critique of “if it bleeds it leads” local journalism, and that's fine as far as it goes. Unfortunately it doesn't go very deep. At one point Louis talks about how in polls, audiences say they watch the local news to stay informed, and yet the total amount of actual local “news” is insignificant compared to the time spent covering fires, car crashes, and violent crime. The fact that ratings go up for more sensational coverage is a given in the film, but digging into the reasons why and maybe casting some of the blame on the audience is an area it chooses not to explore.

While one wishes the film had gone deeper, like its obvious antecedents TAXI DRIVER and NETWORK, it nonetheless remains compelling for most of its running time. Louis may be an unlikeable character, but he's never uninteresting, and Gyllenhaal's performance keeps us invested. Russo's Nina is too much of a caricature to truly work in a film this grim and deadpan, but she does what she can with the role and gets a few moments to shine.

Dan Gilroy's direction is solid, though nowhere near as stylish as that of his brother Tony. But it's his script, or specifically the ending to it, that let's the film down. After giving us 2 hours of distasteful characters in unpleasant situations doing unethical things, the movie just kind of fizzles out without a strong dramatic conclusion. It's an interesting film up until then, but it feels like our trust in Gilroy to bring it all home with something meaningful or at least dramatically satisfying goes unrewarded. 2 ½ out of 4 stars.
Posted by Bob Ignizio at 12:00 AM