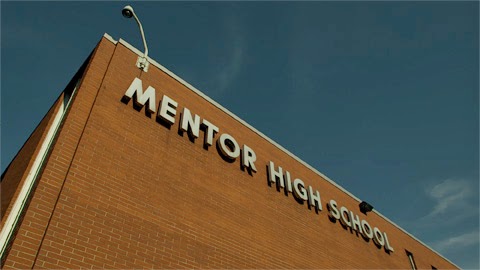 With October and the Halloween season there are a number of big screen horror movies vying for film-goers attention. None of them, however, will come close to being as horrifying as the documentary MENTOR. The film recounts events that took place in the northeast Ohio suburb of the title, events that can only be described as every parent's nightmare: the suicide of a child. The real horror, though, is that not one but five teenagers took their own lives within a relatively short span of time. Worst of all, though, the film offers evidence that these tragedies could have been prevented if the Mentor school system had taken complaints of bullying directed against these students more seriously.

The film deals with two of the deaths in detail: Sladjana Vidovic, a Croation girl who took her life in 2010, and Eric Mohat, a tall skinny kid who, whether he was or wasn't, was seen by his classmates as gay and taunted and harassed mercilessly for it until he killed himself in 2008, just after being told by one of the bullies that he should go home and shoot himself because no one would care.

In both cases, the bullying was no secret, but the school evidently chose to turn a blind eye. But while Eric hid his pain inside, leaving his parents shocked and surprised when he committed suicide, Sladjana told her parents, told her teachers, told guidance counselors – just about any adult she thought might help her. Her parents went to school officials numerous times to try and get them to do something, but even when a football player pushed Sladjana down the stairs, the attitude of the school system seemed to be apathetic at best.

This is an upsetting film to watch, but what would you expect? Director Alix Lambert takes a straightforward journalistic approach to the material with no stylistic affectations, which given the subject matter seems appropriate. This is powerful enough stuff that it doesn't need any dressing up to make an impact. There are some areas that one might wish had been covered more – for instance, the other 3 suicides of Mentor students that took place between 2005 and 2010 are barely addressed. It would be fair to say that MENTOR is a one-sided affair, but given that no one from the school system would agree to be interviewed that's by necessity.

In the absence of any official explanation of their actions by school officials, all we have to go by is the testimony of the friends and families of the victims, and a fairly compelling amount of documents that seem to back that testimony up. There haven't been any further suicides by students in the school system since 2010 that I know of, so perhaps some lessons have been learned. Seems an awfully high price to pay, though. 3 ½ out of 4 stars.
Posted by Bob Ignizio at 12:00 AM