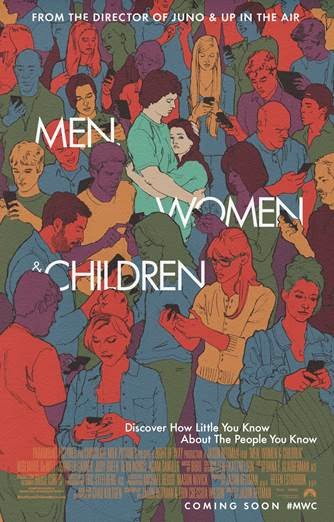 Adapted from a novel by Chad Kultgen, MEN, WOMEN & CHILDREN tries to make some sort of statement about the role of technology in our everyday lives. I can't remember angrily swearing under my breath at a film as much as I did during the last third of Jason Reitman's maudlin, self-important slurry of unlikable characters living out broad melodramas in a grim caricature of the digital age. Though imbued with brief moments of impressive filmmaking and fantastic acting, no amount of skill from cast or crew could rescue this movie from the sheer, unapologetic emotional manipulation perpetrated by its screenplay.

There's also former high school football star Tim (Ansel Elgort) who has quit the team in favor of Guild Wars, his crush Brandy (Kaitlyn Dever), whose phone and computer are monitored down to the keystroke by Apache helicopter mom Patricia (Jennifer Garner), and Allison (Elena Kampouris), an image-obsessed waif who turns to a pro-anorexia Tumblr for dieting tips.

All of these characters trudge around each other, faces awash in the sickly light of monitors and mobile devices, as their lives spiral cartoonishly downward toward predictable tragedies.

Visually, Rietman does a decent job of portraying a world in which more and more conversations are held miles apart through cellular phones, and characters often appear with chat bubbles and screen content hovering around them. It's not a wholly unique device, but Reitman executes and integrates it more consistently than I've seen before, incorporating the text pop-ups and Facebook comments into both his editing and shot composition.

Likewise, some of the movie's most entertaining scenes - chief among them a bit in which Hannah undertakes a brief round of sexting while walking through the mall - leverage actors' ability to perform a range of emotions with only their faces and thumbs.

The entire movie is framed by intermittent depictions of the Voyager spacecraft and narration by Emma Thompson, tracking the communication probes progress across the cosmos while back on Earth, characters masturbate in front of computers and select escorts based on breast perkiness. And I get the joke  - here is modern man's ability to use technology to extend the very heartbeat of humanity to the farthest reaches of the galaxy, and now here is a modern man using the fruit of those same scientific advancements to help jerk it - but it's as sophomoric and glib as the film's continued references to Carl Sagan's "Pale Blue Dot" are needlessly pretentious.

(And the less said about the movie's ludicrous case for 9/11 as the starting point for America's struggle to express emotion through cellular phones, the better.)

While the film is clearly fixated on contemplating human communication in the digital age, I couldn't tell you exactly what, if any, conclusion it reaches. All the more disappointing is the fact that it comes from a young director (maker of the like-it-or-lump-it indie hit JUNO no less) who I would hope has a more complex relationship with technology than some of the curmudgeonly sentiment espoused by the film.

If I had to guess, MEN, WOMEN, & CHILDREN's prime conceit would seem to be that developing ways to communicate more easily does not necessarily increase a species' ability to communicate more effectively. Which is true. What I don't understand is why the film seems to punish its characters so harshly. The dissonance between quality of the tool and skill of the user is a small folly of man far more suited to a biting 90-minute satire (something along the lines of, say, Reitman's first film, THANK YOU FOR SMOKING) than a soggy 120-minute drama.

The film also completely glosses over a larger point - that even prior to the siren call of camgirls and winking emojis, people have been joyful and anxious and discontent and totally unable or unwilling to express those feelings to the detriment of themselves and the people they love. But developing ways to hurt loved ones more easily does not necessarily increase a species' ability to hurt loved ones effectively - a point MEN, WOMEN & CHILDREN conveniently disregards. (1 out of 4 stars)
Posted by Matt Finley at 12:01 AM