[IN THE SHADOW OF THE SUN screens Friday October 10th at 3:45 pm and Saturday October 11th at 5:15 pm at the Chagrin Documentary Film Festival.] 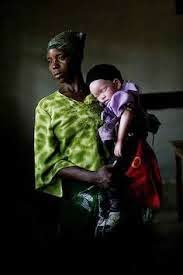 IN THE SHADOW OF THE SUN is no relation to the Oscar-winning documentary about going behind the scenes of grand opera, IN THE SHADOW OF THE STARS. Though it would be fun to imagine a double-bill of these two soundalike nonfiction pictures of quality with nothing whatsoever in common - except that both make you weep to think that more hoi polloi watch "reality TV" than either of these outstanding titles.

...SUN is a troubling, even harrowing feature from director Harry Freeland that exposes a skin-color tragedy of black Africa - and not the one you're probably thinking of. Albinos have long been feared and outcast in tribal society, and sometimes murdered by the superstitious (placing a terrible burden to a minority already susceptible to skin cancer and other health issues).

In recent years, however, particularly in parts of Tanzania, where the albino population is estimated at 170,000, native witch doctors have spread the myth that albino body parts could grant one good fortune and harbor magic medicinal ingredients.

The result is unspeakable. Albinos are murdered and their graves disinterred - and that might be the preferred fate. Living albinos dwell in fear of literal dismemberment at the hands of desperate or greedy neighbors, or even family members. Despite official government disapproval, albinos have become refugees in their own land, living in exile communities and attending segregated schools.


Freeland's camera follows an albino activist named Josephat Torner, who is on a grassroots campaign across the countryside to educate his xenophobic countrymen on the proper science of albinism. Many Tanzanian villagers remain less than sympathetic. One witch doctor, unimpressed and unafraid to go on camera with his ignorance (with an attitude like that, he's likely to be hired by Fox News, or perhaps MSNBC) declares that the magic is real and Torner's limbs will be a valuable commodity.

Indeed, during the course of the filming, mystery marauders (offscreen) attempt to abduct Torner, and you can guess the reason. Hopefully the notion of albino body parts bringing luck won't catch on in our society; I can imagine what the Wall Street people, corporate CEOs and Shanghai billionaires would pay. That would be really awful juju.

Even if rural Tanzania is a world away from Ohio, the sense of civilization's veneer falling away and people being victimized horribly just for being born different ought to resonate deeply. In addition to encounters with the recently mutilated, the movie includes crime-scene photos right out of the Cleveland Torso Killer files - amputated arms and legs and, in one case, a head. Still, one takes home a glimmer of hope in the heroism of Josephat Torner, the real ray of light in IN THE SHADOW OF THE SUN. (3 1/4 out of 4 stars)
Posted by Charles Cassady Jr. at 12:00 AM