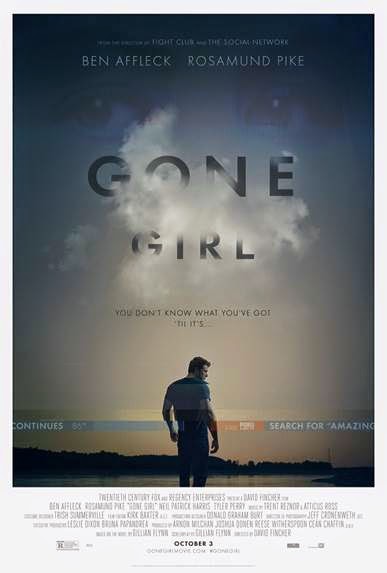 In preparation for writing this review, I downloaded a copy of Gillian Flynn's best-selling novel Gone Girl and devoured it before seeing the movie, directed by the widely admired David Fincher. A twisty thriller about a wife who goes missing and the husband who is the chief suspect in her murder, the book has many devoted fans, and the movie falls into the "most anticipated" category.

Glynn, a former Entertainment Weekly reporter, is a facile, accessible writer, and the book is constructed in an interesting way, with alternating narrators, high suspense and shocking turns. It's a fast, easy read, the kind that used to be called a “page-turner” (now maybe “screen-tapper”), but would not be mistaken for great literature. The plot developments feel manufactured, inserted for shock value only.

The quality of the book doesn't matter, though; often great films are made from not-great books. This film has the advantage of Fincher's stylish technique and fanatical attention to detail. (So meticulous is he that star Ben Affleck changed a setting on a camera in hopes Fincher wouldn't notice; he did, immediately.) It's a very well made film, especially if you like the dimly lit, burnished palette of Fincher's cinematographer, Jeff Cronenweth. (Sometimes you just want to get into the scene and turn on a lamp.) I could do without the portentous, insistent Trent Reznor score, which sometimes drowns out the dialogue.

Author Flynn adapted the novel, and did a remarkably good job of compressing events and defining the characters without their first-person voices, no small feat when you consider how often screenwriters fail at this. The handling, overall, could not be better, but that unfortunately doesn't compensate for the flaws in the story.

At the center of this malign domestic drama is Nick Dunne (Ben Affleck), a boyish, affable writer recently fired from a men's magazine. (His story is inspired by Flynn's own experience being laid off from her magazine.) Nick is married to his dream girl, the beautiful, blond Amy (Rosamund Pike), who had everything: a big trust fund, a Harvard education, class, wit and charm. Amy is also a writer, specializing in magazine personality quizzes (a conceit that allowed Flynn to write many such amusing quizzes into the book).

Amy's parents are the authors of a popular children's book series about “Amazing Amy,” a perfect little girl whose achievements the real Amy experienced as rebukes to her own failures. (When real Amy quit cello lessons, Amazing Amy mastered the instrument.) In a scene reminiscent of the milieu of Fincher's THE SOCIAL NETWORK, Nick and Amy meet awkwardly at a writers' party and embark on their charmed courtship.

A few years later, the married Nick and Amy are both jobless. Their money mostly gone, because her parents have raided her trust fund, they've just moved from New York City back to Nick's bleak hometown of North Carthage, Missouri, to help care for Nick's mom, who's dying of cancer, and his dad, who has Alzheimer's. With his wife's financial help, Nick has opened a bar, ironically named The Bar, which he runs with his twin sister, Margo (called "Go" for short).

On the day of their fifth wedding anniversary, Nick comes home to find his wife missing and the living room in shambles. It appears she's been abducted and perhaps murdered, and before long, Nick becomes the chief suspect. Tantalizing clues abound, based on a treasure hunt Amy constructed annually for the couple's anniversary. Nick decides to follow the clues, which lead to a series of grim and perplexing discoveries in places including Mark Twain's boyhood hometown, Hannibal.

One of Flynn's themes is the media circus of tabloids and cable TV shows like Nancy Grace that exploit wife murders, missing children and other tragedies for faux outrage and ratings. Nick soon becomes regular fodder for a Nancy Grace-like TV host Ellen Abbott (Missi Pyle, twisting her mouth in disgust in a dead-on impersonation of Grace). The movie's advantage is that it can fully exploit the cacophony of wall-to-wall media coverage. Nick can't go anywhere without being recognized as a possible wife-killer, or swarmed by hordes of paparazzi.

Gradually, it emerges that all was not bliss in the Dunnes' marriage, and perhaps Nick was not the model husband he appeared to be. Marriage is another of Flynn's themes: how husbands and wives erect false identities to please each other. Amy was conditioned by her patrician parents (David Clennon and Lisa Banes) to be “Amazing Amy,” an expectation she carried into her marriage. Nick was only too happy to embrace his “cool girl,” who didn't nag him or lift an eyebrow when he stayed out late or forgot to show up to dinner with her friends. Together, the couple scorned those husbands who sheepishly kowtowed to their wives' demands, calling such uxorious men “dancing monkeys.” Flynn demonstrates how these spouse-pleasing facades destroy relationships. It's a valid observation; one wishes, then, that Flynn had not jettisoned realism for a shocking, absurd turn of events that I cannot disclose, but which disappointed many readers of her book (to judge from Amazon reviews).

The performances in this film are superb. Affleck captures Nick's clueless charm, and the versatile British actress Rosamund Pike ably embodies Amy's transformations. As the unfortunately named Detective Rhonda Boney, marvelous Kim Dickens (from TV's Treme) steals every scene she's in, as does Carrie Coon as Margo, the loyal sister who is torn between supporting her twin and suspecting him. Neil Patrick Harris is just right as Desi Collings, Amy's solicitous longtime admirer, and Tyler Perry is very amusing as slick defense lawyer Tanner Bolt (Flynn has quite a way with names).

Gone Girl is an example of superb technique on almost every level, except for the nagging problems of the ending and the posterior-numbing running time of 2 hours, 25 minutes. But forewarned is forearmed: if you decide not to mind those issues, the movie is an enjoyable ride, at least until the home stretch. 3 out of 4 stars.
Posted by Pamela Zoslov at 12:01 AM