Gabrielle (October 17th and 19th at the Cleveland Cinematheque) 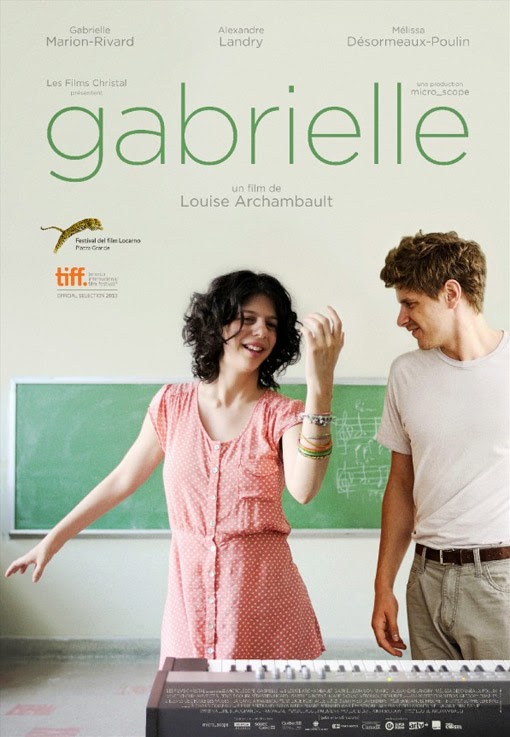 The challenges faced by developmentally disabled adults in gaining independence has been addressed in a number of films, but rarely with as much charm as in the Canadian drama GABRIELLE, set in French Montreal and written and directed by Louise Archambault.

The title character as well as the actress, Gabrielle Marion-Rivard, have Williams Syndrome, a genetic disorder that results in, among other things, “elfin” facial features, developmental delays, strong language skills and an unusually cheerful social personality. The film's Gabrielle is a charming girl who functions at a level high enough to hold an office job. She lives in a group home, where they help administer insulin injections for her diabetes, and sings in a choir at a center for the developmentally disabled. (The actress is also a singer.)

Gabrielle is experiencing the stirring of romantic feelings for her choirmate Martin (Alexandre Landry) while the group, called the Muses of Montreal, is rehearsing for an upcoming festival performance with the famous Quebecois pop singer Robert Charlebois (who appears as himself). The group home personnel are fairly tolerant of Martin and Gabrielle's budding romance and sexual explorations — the couple are, in fact, adults – but Martin's overprotective mother is not so enlightened. Horrified by the specter of her son's nascent sexuality, she forbids Martin further contact with Gabrielle.

Gabrielle's is heartbroken, her pain exacerbated by the fact that her sister, Sophie (Mélissa Désormeaux-Pouli), who is her closest companion and de facto guardian (since their mother is relatively detached), is planning to join her boyfriend, who is teaching in India. Gabrielle decides she wants to live in her own apartment, like her sister. “I want to be normal like you," she declares to Sophie. "I want to make decisions like an adult.” A day spent on her own, however, ends in disaster, and Gabrielle is taken to the hospital in diabetic shock.

The film's view of people living with disabilities is frank and unsentimental, showing them as fully sexual beings deserving of normal, independent lives. The screenplay and acting are empathetic to the feelings of everyone, especially Sophie, who is torn between devotion to her sister and love of her boyfriend. The glimpse of French-Canadian language (a little harder-sounding than the French spoken in France) and its popular culture are fascinating. The climactic concert featuring the portly, frizzy-coiffed Robert Charlebois and his astoundingly strange songs, is a particular treat. For English speakers, Charlebois' lyrics translate like this passage from his song, “Ordinaire” (Ordinary):

When I'm done for and living on the street
This great public, I won't have it anymore
That's when I'll end up stark naked
The day when I can't do it anymore
There will be others, younger, crazier
To make the Boogaloos dance

This sensitive and well made film was Canada's entry for the Best Foreign Language Film at the 86th Academy Awards. It wasn't nominated, but it has won many Canadian film awards, and deservedly so. 4 out of 4 stars.