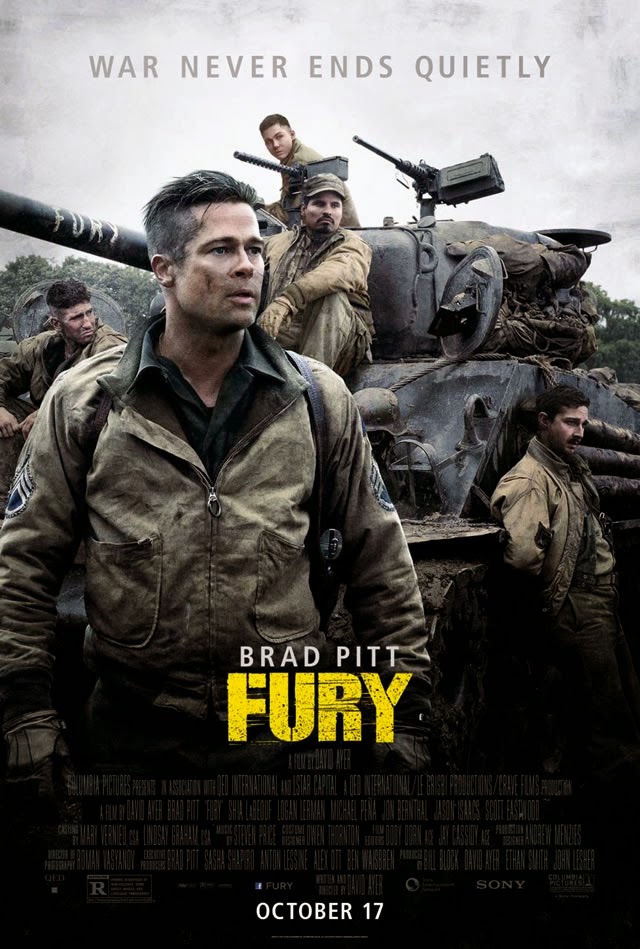 Brad Pitt plays Don “Wardaddy” Collier, Sergeant in charge of the crew on board the eponymous Sherman tank in the WWII drama FURY. He's just lost his bow gunner, and the replacement he's been given is a typist with no battle experience named Norman (Logan Leman). Wardaddy isn't too happy about it, but he has no choice but to get this new member of the team battle hardened as fast as he can with the help of his crew – Boyd "Bible" Swan (Shia LeBouf), Trini “Gordo” Garcia (Michael Pena), and Grady “Coon-ass” Travis (Jon Bernthal) – all of whom have been serving together for years.

Covered in mud, blood, and grease and utterning a near constant stream of profanities and vulgarities, the men of Fury go on a series of increasingly dangerous missions inside Nazi Germany during the final days of the war. The Germans may be losing, but they're still fighting with all they have, at least in part due to the threat of execution by SS soldiers if they refuse. Even young children have been forced to decide between putting on a uniform and grabbing a gun, or being hung from a post with a sign proclaiming their cowardice around their necks.

FURY is a little bit DAS BOOT, a little bit SAVING PRIVATE RYAN, and a little bit 300 (in a tank, natch). Even when its plot slips into war movie cliches (and the more accurate depiction of brutality aside, it does), the cast and David Ayer's (END OF WATCH) direction ensure that it remains compelling. And yes, say what you will about his recent odd behavior, but even Shia LeBouf is good here. It's not a pleasant movie to watch unless you like seeing human beings turned into hamburger every few minutes, but it does its job of showing us that war is Hell in grim style. 3 out of 4 stars.
Posted by Bob Ignizio at 12:01 AM