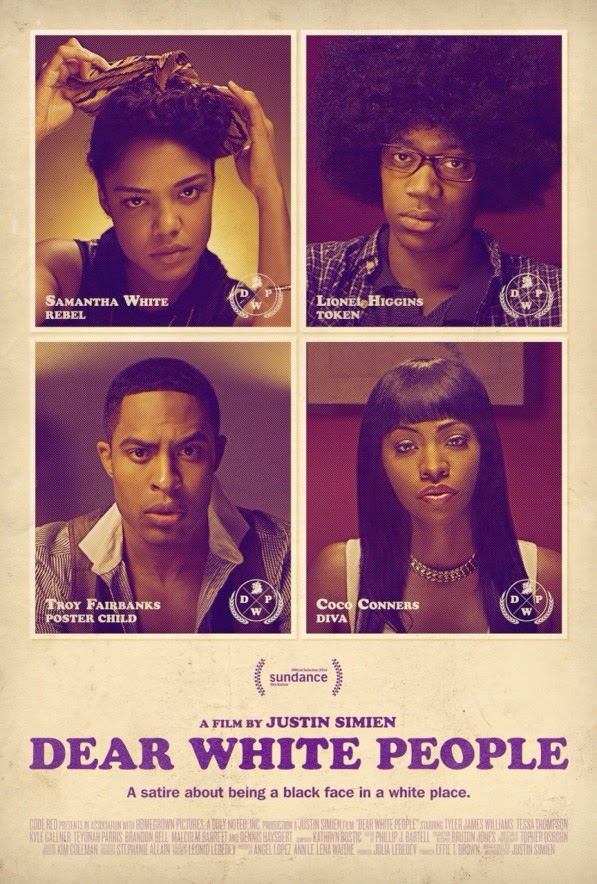 According to Roger Ebert's “Little Rule Book” for film critics, the late Gene Siskel, “hated [trailers] so much he would stand outside a theater until they were over. If he was already seated in the middle of a crowded theater, he would shout "fire!" plug his ears and stare at the floor.” The teaser trailer for DEAR WHITE PEOPLE, which went viral on Youtube, is a good example of why any serious movie lover should avoid trailers. Not only does it ruin the best jokes in the movie, more to the point it mischaracterizes the film in its entirety as a comedy, creating expectations that can't help but go unmet. Which is a shame, because DEAR WHITE PEOPLE is, despite some shortcomings, a good indie drama that deals with race in a complex and compelling manner.

Those funny bits in the trailer are still in there, but they are more comic relief than an accurate representation of the film's overall tone. Which is not to say that DEAR WHITE PEOPLE goes to the other extreme, either. It does confront issues of race, specifically the sort of issues that black students at an Ivy League college, ostensibly haven risen above race, still have to deal with. But writer/director Justin Simien does a good job of integrating those issues into his film naturally rather than hitting the audience over the head with them.

Not unlike early Kevin Smith, where Simien most excels is in creating believable characters and writing good dialogue for them. In lesser hands, these characters – activist female DJ Samantha (Tessa Thompson), gay outcast Lionel (Tyler James Williams), suave and popular Troy (Brandon P Bell), and weave-wearing video blogger Coco (Teyonah Parris) – would all be one note stereotypes. Here, they are fully fleshed out humans who each have good and bad sides.

The incident that drives the fairly minimal plot in DEAR WHITE PEOPLE is a party being held by the school's humor club, comprised almost entirely of white students including Kurt (Kyle Gallner), son of the school's President. The theme of the party is “hip hop”, but the invitation makes it clear that attendees are supposed to dress and act as stereotypical blacks, with references to fried chicken and watermelon, among other things. Some students even show up in blackface. Lest anyone think this is exaggeration, the film's closing credits includes a number of news stories of similar parties taking place at real universities in recent years. We know from the film's opening that the party results in what the media describes as a “riot”, but exactly what that entails we don't see until the end.

The characters in DEAR WHITE PEOPLE present a diverse range of opinions on the party and other racial issues in a supposedly post-racial America. Because Simien has written all of these characters as real human beings, everyone's viewpoint is treated with respect. That makes this more of a movie designed to get people thinking than one that tells them what to think. Even if it's a given that a party like the one depicted in this film is wrong, some of the reactions those students offended by it take are shown as being poorly thought out as well. Because let's face it, late teens and early twenty somethings don't always exercise the best judgment, even regardless of what side of any given issue they fall on.

The film does meander a bit and probably could have used some tightening up. It also has a bit of the look and feel of a low budget made for TV movie, which given the budget the filmmakers had to work with is probably about what you would expect. It's not shoddy or amateurish by any means; just kind of bland and flat. Fortunately the writing and performances are engaging enough to keep our attention. 3 out of 4 stars.