Bound by Flesh (October 4th and 5th at the Cleveland Cinematheque)

[BOUND BY FLESH screens Saturday October 4th at 8:30 pm and Sunday October 5th at 8:25 pm at the Cleveland Cinematheque.] 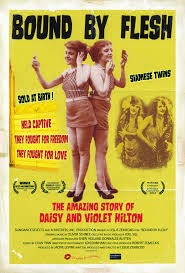 Today it's politically incorrect to call human genetic abnormalities "freaks." Instead we call them "differently abled." Either that or "Obama Democrats" (rimshot).

But anyone who researches the lives and times of human oddities sooner or later comes across the name of filmmaker Leslie Zemeckis. She is the documentarian-wife of A-list director Robert Zemeckis, and the fact that they've been married actually for, like, YEARS or something, probably qualifies them as freaks, as far as the values of the entertainment industry. Fortunately, Mrs. Z has a job skill that means she doesn't have to sit in a midway tent on Sunset Boulevard and be gawked at by people. She makes cool nonfiction, like her previous chronicle of classic striptease artists, BEYOND THE BURLY Q (which was both a book and a movie).

Her latest, BOUND BY FLESH, is an expansion on a footnote in BEYOND THE BURLY Q, the odd life and exploited times of "original Siamese twins" (a tag hung on a couple of different sets of freaks in that era, notably the Chinese brothers Chang and Eng) who performed on the showbiz circuit, on the burlesque stage, and in movies: Daisy and Violet Hilton

One pre-internet encyclopedia of movie history (to which I was humble contributor) had a mini-bio of the Hilton sisters that, going by this documentary, was chock full of inaccuracies. I'm glad Zemeckis has set the record straight, even if the two women (woman?) at the center remain unfocused and elusive. Rather like Chauncey Gardner/Chance the Gardener in BEING THERE, there is a question of whether poor Daisy and Violet ever had a chance to evolve any sort of functional personalities, even as Zemekis comes up with  many eyewitnesses and authors (including a goddaughter and a remarkable spoken-word autobiography the sisters made) to narrate the saga.


The Hilton girls were born in 1908 to an unwed woman in Brighton, England, and - when the conjoined babies survived their first few days, which nobody much expected - the sisters were more or less sold to their mother's employer/landlady (the Hilton from whom they took their surname). She cashed in on the children's' deformity - connection at the lower back - with postcards and early music lessons, making Daisy and Violet into tourist attractions, then a traveling mufti-instrumental music act. Attractive and personable, they never attended school, and their lives and horizons were first controlled stiflingly by their "aunt," then by an overbearing Australian bloke with the Joseph Heller-esque name of Meyer Myers, who married into the Hilton entourage.

Their non-biological family, migrating to the USA, ran the sisters' lives and vaudeville-circuit appearances well enough to amass enough to dwell in a mansion in San Antonio. Still, in 1931 the Hilton girls, having attained adulthood, successfully campaigned to be legally emancipated from their controlling guardian. Evidently, it was even more disastrous a move than when Macauley Culkin would do the same half a century later. The Hilton girls continued to perform their singing and music act, even as tastes changed and their flavor of vaudeville came to an end, losing most of what money they had accrued. They appeared (as Siamese twins, of course) in two movies, the 1932 FREAKS, for Universal, and the 1950 cheapie CHAINED FOR LIFE. Though critics now hail FREAKS a macabre masterpiece (and the Hilton sisters are excellent in it), audiences, critics, the Universal brass and other morons despised and banned  it in the Depression era. Even Leslie Zemeckis seems to write the picture off as a degrading experience for the heroines.

But worse was to come, as Daisy and Violet descended into vulgar publicity stunts, in which the Siamese-twin sisters each married different men at different times, apparently mostly for the commercial notoriety (both grooms happened to be gay). It seems the Hilton girls did enjoy active sex lives, one becoming pregnant out of wedlock, and inspired a divorce lawsuit involving another lover. Most of their boyfriends seemed to be musicians (I put that fact out there as a public-service announcement; you think up the warning) also on the nomadic showbiz routine (I noted in the documentary that Fremont, Ohio, was one of the places where the Hilton sisters turned up with their band).

Finally, facing destitution, the pair wound up stranded in small-town America - Charlotte, to be precise - where a charitable, churchgoing businessman set them up with jobs in his grocery store. The film posits that in their last few years of their lives (the sisters died of flu in 1969), the Hilton twins actually did enjoy some level of normality and friendship among common folk - though they remained a sheltered couple and it's a bit presumptuous to make that verdict. Very nearly everything else they did, either on their own or dictated by their handlers, was all about being famous and earning money performing, which were the only skills they possessed. And the only interests?

Pathetic as that sounds, I might have wished Zemeckis had nudgingly reminded viewers somehow that there are 21st-century pseudo-celebs who pretty much make freaks of themselves nowadays to hit big on "reality TV." And they are not conjoined twins (bet some of them wish they were, long as they don't have to split the paycheck. Now on MTV, Teen Siamese-Twin Mom, anyone?). In terms of tabloid culture and self-absorbed obsession with fame, not much really has changed much since the Hilton's sideshow peak in the 1920s and 30s.

The greatest evidence of the Hiltons having a deeper inner life may be that, when medical science offered them a chance to be separated (which turned out to be quite feasible, in their case, just as with Chang and Eng), Daisy and Violet refused. Those interviewed here chalked it up to the love and emotional interdependence the girls shared, through good times and bad.

Nobody dares suggest (because nobody interviewed me) that the ladies didn't liberate themselves via surgery mainly because they couldn't let go of the gimmick that was their only real foothold in showbiz.

Now, where can I find one of those kindly grocery-store owners around here with a job opening? I'm not doing terribly well either. Chances are, though, Siamese twin girls are now shunted to the front of the line for employment thanks to "diversity" hiring policies. Maybe Obama will make one the next head(s) of his Secret Service (3 out of 4 stars)