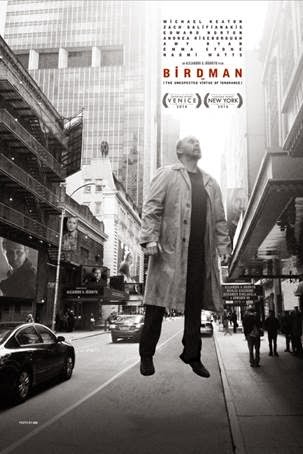 The spirit of Robert Altman hovers over  BIRDMAN (or The Unexpected Virtue of Ignorance), the much talked-about new film by the Mexican director Alejandro González Iñárratu. A dark showbiz satire, the film echoes Altman's The Player, and its central event, a play based on Raymond Carver short stories, evokes Altman's Short Cuts. Although González Iñárratu doesn't have Altman's flair for ensemble drama, it's an ambitious film with rhythmic style and technical flair.


The director, who also co-wrote and produced, was reportedly a tough taskmaster, requiring the cast to perform up to 15 pages of dialogue at a time and hit precisely choreographed marks inside Broadway's St. James Theatre, where most of the film was shot. Cinematographer Emmanuel Lubezki undertook Hitchcock's Rope technique of manipulating the editing to create the appearance of one continuous long take. Aficionados of cinema technique will go crazy over this, but for the casual viewer, such flourishes add little to a film.

Much of the attention the film has received is about the performance of Michael Keaton, who stars as Riggan Thomson, a washed-up actor trying to revive his career by mounting a Broadway play, an adaptation of Carver stories (are we still doing Raymond Carver?), which he wrote and will star in.

Like Keaton, best known to younger audiences for playing Batman, Riggan is famous for playing a dark avian superhero called Birdman, whose rumbling, basso voice haunts Riggan, taunts him in his dressing room while he meditates cross-legged in his underwear while, inexplicably, levitating. “This place is horrible,” complains the voice of Birdman. “Smells like balls. You were a movie star, remember?”

It is the voice of Riggan's unconscious. The play is a desperate effort to revive his flagging career and salvage some respectability. He has refinanced his house in order to finance the production. A show-business journalist asks Riggan, “Are you afraid people will say you're doing this play to battle the impression that you're a washed-up comic strip character?” Keaton looks almost unrecognizable — balding, sunken-cheeked and a bit dissipated, he inhabits the wounded vanity of the actor raging against the dimming of the lights.

Zach Galifianakis, as Jake, the play's producer and Riggan's best friend, proves a good dramatic actor, and Edward Norton is sinuous and glib as Method actor Mike Shiner, who deviously sabotages Riggan's direction, belittling him and pulling onstage pranks, like drinking real vodka in a kitchen scene and suggesting his co-star have actual sex with him onstage.

Riggan is surrounded by a quartet of complicated women: Laura (Andrea Riseborough), an actress in the play who is also Riggan's lover, and who can't always distinguish between drama and real life; Lesley (Naomi Watts), the lead actress thrilled to be making her Broadway debut, even in Riggan's cursed production; Sylvia (Amy Ryan), Riggan's ex-wife, who knows him better than anyone else; and their cynical daughter, Sam (Emma Stone), fresh out of rehab and helping out backstage and looking for adventure, which she finds with Mike Shiner. Stone is superlative in delivering a couple of intensely bitter speeches, the emotion enhanced by those astonishingly immense blue eyes. (A note on the casting: in addition to Keaton, both Norton and Stone are alumni of superhero movies, THE INCREDIBLE HULK and THE AMAZING SPIDER-MAN, respectively.)

The narrative drive and pulsating rhythm emphasized by Antonio Sanchez's maddening drum score, are a departure for González Iñárritu, whose trademark has been the use of multiple, connected story lines (AMORES PERROS, 21 GRAMS, and BABEL) and stories focused on the plight of immigrants (his 2010 Spanish-language feature BIUTIFUL ). It's as though Gonzalez Iñárritu wanted to shed his skin, like his hero Riggan Thomson, and do something completely different, treading the boards in a real Broadway theater and exploring the concerns of actors. Its tone is also a departure; the earlier films shared a melancholy humor, while BIRDMAN is brisk and bitter, with pages and pages of acrid dialogue. It's billed as a comedy, but not one that makes you laugh.

Some scenes hark back to the backstage dramas of earlier decades, like Joseph L. Manckiewicz's witty All About Eve, echoing that very verbal film's articulation of the conflicts between writers, directors and actors. The appearance of a New York Times theater critic (Lindsay Duncan) bent on destroying Riggan's play is right out of Sweet Smell of Success. These evocations are not unwelcome, but this film is shallower, more facile than those earlier models. It's an absurd conceit, by the way, that a prominent theater critic would pan a play she didn't attend in order to pursue a personal vendetta. And, while we're at it, may I also say that the sight of an actor in his underwear hurrying through Times Square would hardly raise an eyebrow, much less major hubbub, in a Manhattan that has seen The Naked Cowboy for years. Also, what's with that pretentious subtitle?

This is an actors' movie, with plenty of acidulous dialogue for the talented cast to chew on, as well as fistfights and the trashing of dressing rooms. The screenplay is rife with knowing commentary about acting, show business, and the relative stature of theater versus movies. Some of this is sharply observed (Mike's vivid demonstrations of Method acting), while others are tiresome (Sam banging on about the importance of having lots of Twitter followers). Riggan's hectoring “Birdman” voice reminds him that he's a star, with worldwide fame. Compared to that, what matters a piddling stage play?

Surprisingly, Riggan even has superpowers, demonstrated in an outburst of magical realism, courtesy of CGI. The film's surrealistic flourish is, I believe, ill-advised, a betrayal of the realistic theatrical drama already established. It's a far too easy way of solving the problem of a story that has nowhere to go. There's still quite a lot to enjoy in this ambitious, talky film. I have a feeling Altman would have approved. 3 out of 4 stars.
Posted by Pamela Zoslov at 12:00 AM