[A FISTFUL OF DOLLARS screens Thursday October 2nd at 6:45 pm and Sunday October 5th at 8:25 p.m. at the Cleveland Cinematheque.] 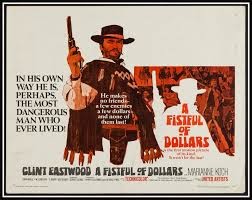 In addition making a superstar out of a cowboy TV actor named Clint Eastwood, A FISTFUL OF DOLLARS was the first well-known "spaghetti western." This was the rather derogatory term for Italian cowboy movies made far away from the beaten trails of America's Monument Valley or even the low-budget Monogram Pictures backlot.

In the 1960s Italians, Spanish, German and even Israelis started making their own westerns, sticking to the classic iconography of gun duels, saloons and desperadoes on horseback, but without the censorship codes of Hollywood. Actually, the Germans were at the lead of the pack in this one, doing “Sauerkraut Westerns” based on the novels of their own uber-popular western novelist Karl May. The Italian movie industry jumped eagerly on board the chuckwagon.

In the case of Italian director Sergio Leone, there was not just an elevated level of violence, but also a then-groundbreaking filmmaking style, with an emphasis on long, tense closeups of the actors faces, wide-screen camera compositions and hauntingly unusual music by Ennio Morricone. Westerns had been jokingly called "horse operas" before. Leone made them something close to real opera, and his style was much imitated. It also helped that Leone was recommended the lean, little-regarded young American actor Eastwood to as a recurring hero (Morricone originally wanted Henry Fonda or James Coburn), triggering another illustrious career.

A FISTFUL OF DOLLARS is a close remake of a renown Japanese samurai drama YOJIMBO (director Akira Kurosawa was reportedly not happy about the imitation), with guns instead of swords.

Setting is a grim Mexican border town called San Miguel. Into its dusty streets rides an American, the Eastwood character, who would become known as The Man With No Name. After getting bullied by some gunmen (who also harass a little boy by shooting at him), TMWNN learns from a friendly saloon-keeper what's up with the place. It's a lawless town that makes money buying guns and ammunition cheaply, then selling it to the Indians. Moreover, there are two factions involved, frequently killing each other. One is bossed by the corrupt sheriff/mayor Baxter and his family. The other is a rival gang led by the Rojo brothers.

In a standard American movie from this time, the white-hatted cowboy hero, maybe with a faithful sidekick, would take care of all of the bad guys one by one, fair and square (and probably sing a song or two). Not the Clint Eastwood character. Instead (after impressing everyone with his marksmanship by killing four men at once) he hires on with the Baxter gang, then with the Rojo gang, studying their methods and informing each criminal boss about the other one's movements, turning them against each other. He also pockets substantial money from each for his services. Even when he gets caught by the Rojos (for a truly selfless and noble act, helping an innocent family escape their clutches), the Rojos still think he's working for the Baxters, and take revenge accordingly. By the end, the one gang has wiped out the other, and Eastwood can handle the bad guys left over.

Though he doesn't come across as all that horrible these days, The Man With No Name was a pretty disturbing character to American censors. When DOLLARS first aired on TV, the studio hastily shot a prologue (with an Eastwood stand-in with his back to the camera) to explain that he's got a higher purpose than profit - he's really an undercover US lawman being sent on a mission to clean up the town, by guile and stealth. Word is that Clint Eastwood was not amused. There is a scrap of incidental dialogue about the Man With No Name’s past to indicate that the gunslinger empathizes deeply with the victims in San Miguel, not the victimizers.

Sergio Leone did two followup features about the Man With No Name, FOR A FEW DOLLARS MORE and the one that took the whole franchise to a masterpiece level, THE GOOD, THE BAD AND THE UGLY. All were worldwide hits, and cowboy pictures would never be the same. (3 ¼ out of 4 stars)