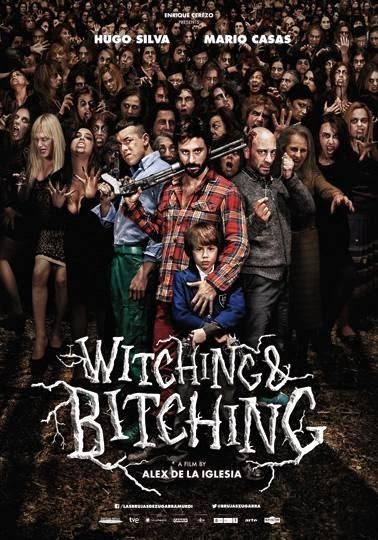 Since his 1993 debut feature ACCION MUTANTE, filmmaker Alex de la Iglesia has had a penchant for blending over the top horror comedy with social commentary. Not unlike Sam Raimi and Peter Jackson, he sort of stepped away from that kind of thing to concentrate on more mainstream fare for much of the first decade of the 21 st century. Unlike Raimi and Jackson, however, de la Iglesia returned to his cult film roots like gangbusters with 2010's THE LAST CIRCUS. That continues to be the case with his latest, WITCHING & BITCHING, a horror/comedy about a group of hapless bank robbers finding themselves trapped by a coven of flesh eating witches, with a “battle of the sexes” theme underlying the action.

Jose (Hugo Silva) is the ringleader of the thieves. The heist involves kidnapping local street performers and stealing their costumes, with Jose taking on the role of Jesus Christ. His primary accomplice is Antonio (Mario Casas), dressed as a toy soldier. Also aiding and abetting in the robbery is Jose's 8 year old son Sergio (Gabriel Delgado). Just because dad is committing armed robbery is no reason to miss the one day of the week he gets to spend with the boy.

Not only is Sergio his dad's accomplice, he's also his motive. Jose's ex wife Silvia (Macarena Gómez) refuses to grant joint custody, so Jose plans to use the money from the heist to start a new life in France with his son. Antonio has issues with his significant other as well, suffering from feelings of inadequacy because she makes more money than he does, especially now that he's lost his job. And as luck would have it, the cab driver the robbers carjack, Manuel (Jaime Ordóñez), isn't exactly living in marital bliss, either. Further reinforcing the film's theme is the nature of the robber's haul itself, a bag full of gold wedding rings symbolizing the futility of marriage.

While making their escape, the group winds up in the town of Zugarramurdi, a village renowned as the birthplace of witchcraft, at least according to Manuel who reads a lot of cheap paperbacks on lurid subjects. As it turns out the paperbacks are right, and the thieves soon find themselves held captive by a three generations of witches – eldest (and senile) witch Maritxu (Terele Pávez), confident and composed head of the coven Graciana (Carmen Maura), and young, punky, motorcycle-riding Eva (Carolina Bang) – who believe the arrival of these thieves has been prophesied, and that Sergio is the chosen one. So they call in the rest of the coven and prepare to for a big ritual, complete with a feast at which the rest of the robbers will be the main course.

De la Iglesia depicts all his male characters as irresponsible idiots and slackers, and all his female characters as, well, witches or bitches. The film seems a bit inconsistent in its point of view on male/female relations, though, and despite seemingly wanting to split the blame, it's definitely the women who get it the worst.

None of which is to say that the film isn't funny or entertaining. Any movie that guns down Sponge Bob in its opening sequence, features a major supporting character who lives directly under a toilet, and lets loose a rampaging giant fertility idol to stomp on the cast near the end clearly has its moments. Not quite enough to put this on the same level as de la Iglesia's best films DAY OF THE BEAST and PERDITA DURANGO, perhaps, but more than enough to make it worth checking out. 3 out of 4 stars.