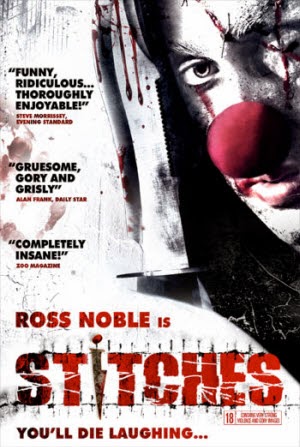 Not since the 1991 cult classic SHAKES THE CLOWN has there been a finer depiction of the seedy side of clowndom than the first few minutes of STITCHES. The title refers to Richard “Stitches” Grindle (popular British stand-up comedian Ross Noble), a disheveled looking party clown who we first meet having sex with a woman while in full clown regalia. He has to leave the act unfinished when he realizes he's running late for Tom's 10th birthday party, so with precious little time for niceties like personal hygiene he rushes off to his gig.

The kids hate Stitches, and not without reason. He's not funny and sucks at making balloon animals. So to get their money's worth the little rugrats turn to tormenting their would-be entertainer. It's loads of fun until a freak accident results in Stitches' bloody demise, much of said blood winding up splattered all over the birthday boy. Needless to say, it's no surprise that Tom (Tommy Knight) and his party guests still have a few issues when the film flashes forward six years. But any lingering psychological scars are nothing compared to the physical damage that a recently resurrected Stitches sets out to inflict on the kids who sent him to his grave.

While coulrophobics will probably still be creeped out by STITCHES, writer/director Conor McMahon aims more for gruesome laughs than scares. The result is kind of like a Troma film with a bigger (though definitely not big) budget, or the early works of Peter Jackson if Jackson hadn't been as talented. Not exactly high praise, but the film is funny at times, and the old school practical gore effects are sure to be appreciated by eighties horror aficionados. Noble creates a memorable new horror icon even if the film isn't quite worthy of the character, and the rest of the cast turn in passable performances without really making much of an impression, which is about par for the course when it comes to knife fodder in a dead teenager movie. It's ultimately disposable, but good for a few laughs if you're in the mood. 2 ½ out of 4 stars.
Posted by Bob Ignizio at 12:00 AM