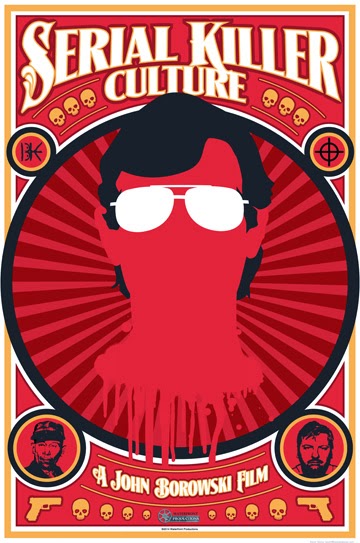 Some people just can't seem to get enough of serial killers. And not just the witty, fictional ones like Hannibal Lecter and Dexter, either. There are plenty of folks out there who are fascinated for varying reasons with real life murderers. For the most part this fascination goes only as far as watching reality shows or reading true crime books. For others, it extends to collecting “muderabilia” or producing creative works about these real life monsters. It is this latter group that John Borowski's documentary SERIAL KILLER CULTURE concerns itself with.

The lion's share of SERIAL KILLER CULTURE focuses on those who collect serial killer “art”. It's fairly well known that John Wayne Gacy had a veritable assembly line going in his cell doing paintings, mostly of himself in full clown regalia or of famous pop culture characters like Disney's The Seven Dwarfs. But just about every piece of human garbage to ever achieve some measure of infamy for taking the lives of others has followed suit, unleashing a glut of amateurish efforts that fetch big money from their fans. We also get to see a Jeffrey Dahmer walking tour in Wisconsin, hear from a comic book publisher who was sued over a Dahmer comic book, gaze upon paintings inspired by (as opposed to made by) serial killers, and listen to music ranging from an acoustic folk duo to a couple of heavy metal bands.

While the film is not without interest, it doesn't flow particularly well. The film clocks in at almost two hours, and there's plenty of room for editing. One could also easily quibble with both some of those included in the doc, and some of those conspicuous by their absence. For instance Slayer, one of the biggest bands to do songs about serial killers. It's possible Borowski approached them for an interview and they declined, but they should have been mentioned. Ditto for Cleveland's own Derf Backderf, whose own Dahmer related graphic novel 'My Friend Dahmer' has found its way into the hands of far more readers than the comic dealt with here. Derf's book makes a cameo appearance on the shelf of one of the interview subjects, but otherwise goes unmentioned. And if you're going to cover comic books, art, and rock music, why is there barely any mention of the countless films made about or inspired by serial killers? Those interested in this sort of thing will probably still find much here worth their time, but if Borowski intended this to be a definitive look at how serial killers have affected mainstream culture, he came up well short of the mark. 2 ½ out of 4 stars.