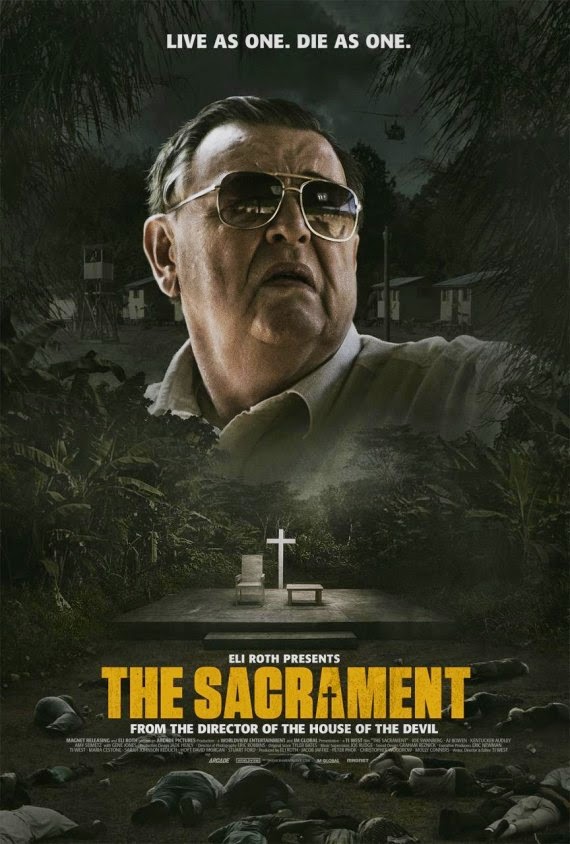 The quote, “those who do not remember the past are condemned to repeat it,” is originally attributed to George Santayana, but anyone who lived through the seventies likely remembers it due to its association with cult leader Jim Jones. Of course the question is, how well has Jim Jones and the mass murder/suicide at Guyana been remembered? There are important lessons to be learned from this horrific moment in history about the ways that religion can be used to manipulate people into doing horrible things.

Director Ti West hasn't forgotten, and with his latest film THE SACRAMENT, he does his best to make sure viewers don't forget, either. The story has been moved to the present, and instead of a Congressman and family members flying to Guyanna to check up on loved ones and constituents, it's Vice Magazine reporters Sam (A. J. Bowen) and Jake (Joe Swanberg) accompanying fashion photographer Patrick (Kentucker Audley) as he checks up on his sister Caroline (Amy Seimetz). Caroline is a recovering drug addict who has only good things to say about Eden Parish, a commune in an unspecified jungle locale, and its charismatic leader, a Mississipi born preacher who everyone calls “Father” (Gene Jones). If the commune is so great, though, why are the reporters greeted by armed guards who seem to be looking for a reason to pull the trigger?

The film is shot in the found footage style, but since the folks doing the filming are supposed to be professional, THE SACREMENT looks professional for the most part, too. Bowen and Swanberg are likable enough protagonists, but it's Gene Jones as "Father" who really impresses here. He never goes over the top into cartoon villainy and you can almost see the appeal he would have to his followers yourself.

Writer/director West has impressed me in the past with his filmmaking skill and style in films like HOUSE OF THE DEVIL and THE INNKEEPERS, but there was always something about his previous films that didn't quite do it for me. Not so this time. There's precious little to complain about with THE SACRAMENT. The raw story material is so inherently compelling all West has to do is just let it unfold more or less as it happened, with just enough tweaking that viewers who do remember the past won't be entirely sure things will play out exactly as they did in Jonestown. West handles the material with subtlety and taste, but there's no getting around that some people will still see this as exploiting a real life tragedy. It doesn't feel that way to me, but I can respect that others will feel differently. 3 ½ out of 4 stars.