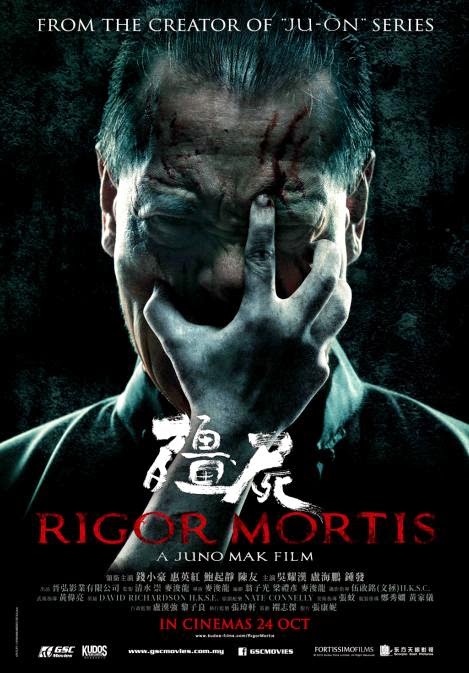 In a manner similar to the 2008 Jean-Claude Van Damme vehicle JCVD, RIGOR MORTIS finds Hong Kong actor Chin Siu-ho playing a fictionalized version of himself. Once cast in such popular fare as the MR. VAMPIRE series and Jet Li's FIST OF LEGEND and TAI-CHI MASTER, Chin has fallen on hard times as he movies in to a dilapidated high rise apartment building, and in fact plans to kill himself there. However when he attempts suicide, he finds himself assaulted by evil spirits trying to take possession of his body. Chin is saved both from the spirits and himself thanks to the timely intervention of another resident of the building, former vampire hunter Yau (Anthony Chan, another MR. VAMPIRE veteran). That's far from the end of the supernatural goings-on in the building, and not the last time Chin's life will hang in the balance, either.

Actor and pop music star turned director Juno Mak made this film as a tribute to the MR. VAMPIRE series that Chin starred in in the eighties and nineties, and many of the cast members had roles in those films. However, RIGOR MORTIS is a far more grim film than the ones that inspired it, and deals with more substantive themes. If you put it on expecting to see campy hopping vampires doing battle with half wit magician's assistants who combat the living dead with magic spells, kung fu, and handfuls of sticky rice, you'll likely be disappointed. Taken on its own terms, though, RIGOR MORTIS is a very good film.

Mak shows considerable talent behind the camera in his first directorial outing (he also co-wrote the screenplay with Philip Yung and Jill Leung). He clearly has an affection for those loopy nineties films, but has no qualms with subverting the tropes of the genre for more serious purposes. The visual style is quite striking, but doesn't wallow in it at the expense of performance. It's a fair criticism to say that the film perhaps take itself a little too seriously, and that its symbolism is probably more dense than necessary. Mak's co-producer on the film is Takashi Shimizu, best known as director of the JU-ON franchise, so perhaps some of that seriousness is his influence, although guessing to what degree he influenced the film would only be pure speculation on my part. The film doesn't quite measure up to its own ambitions, and the ending will likely feel like a cop out to some, but I found it mostly satisfying, particularly in comparison to some of the crap I've watched this month. 3 out of 4 stars.
Posted by Bob Ignizio at 1:40 PM