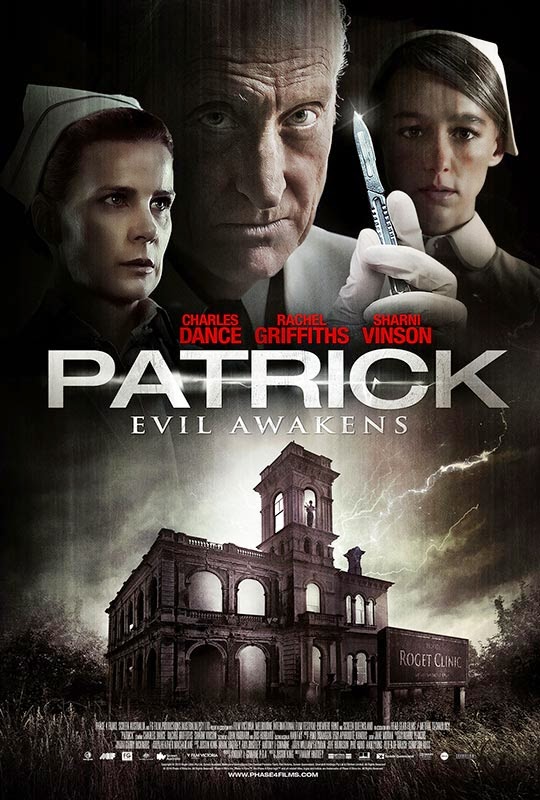 In PATRICK: EVIL AWAKENS, nurse Kathy Jacquar (Sharni Vinson, star of YOU'RE NEXT) is starting a new job at a research facility for coma patients. Her boss there is the smug and condescending Dr. Roget (Charles Dance, Tywin Lannister in Game of Thrones), although she also has to deal with his unpleasant daughter Matron Cassidy (Rachael Griffiths). To further complicate matters, and provide more potential victims for once the scary stuff starts, Kathy has just left her fiance Ed (Damon Gameau). And even though she still has feelings for Ed, Kathy also begins a relationship with a celebrity doctor named Brian (Martin Crewes) after being set up by co-worker Nurse Williams (Peta Sergeant).

After just a short time on the job, Kathy becomes upset with the way Dr. Roget treats his patients, especially Patrick (Jackson Gallagher). While Kathy at first feels sympathy for this young man trapped seemingly doomed to life in a vegetative state, it isn't long before she and everyone around her learn to fear him. That's because not only is Patrick conscious, but thanks to Dr. Roget's experiments on him, he's developed psychic powers. He's also developed a full blown obsession with Kathy, and it isn't long before he's using his powers to get the competition out of the way.

I've never seen the original 1978 version of PATRICK, so I don't know how faithful this remake is. One thing's for sure, though. It definitely has the feel of a certain kind of seventies horror film. Think Brian DePalma's work from around the same time (CARRIE, THE FURY), as well as preposterous but fun thrill fests like Richard Donner's THE OMEN.

Like the original, PATRICK: EVIL AWAKENS, was made in Australia, and has to get by with a far more meager budget than those Hollywood productions. Aside from a couple of unfortunate CGI effects, though, it looks surprisingly slick. And while the cast isn't loaded with big names like Kirk Douglas or Gregory Peck, the actors are nonetheless first rate. They need to be in order to put over some of the silly ideas and dialogue in Justin King's script. The stylish direction of Mark Hartley helps further distract the viewer from how ridiculous it all is. Credit also goes to Pino Donaggio's old school orchestral score, yet another link to the seventies. The end result may not be a classic, but it is a fun, visually appealing knock off of the seventies films that inspired it. 3 out of 4 stars.
Posted by Bob Ignizio at 12:00 AM