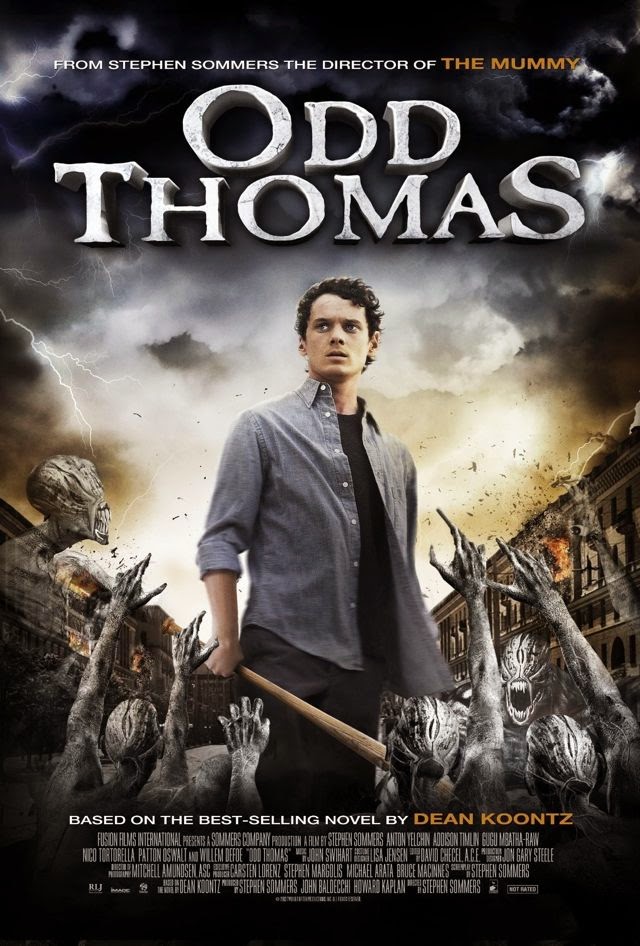 You can tell just by looking at it that ODD THOMAS had ambitions for the big screen. Based on a novel by best selling author Dean R. Koontz and directed by Stephen Sommers (THE MUMMY series, G.I. JOE: THE RISE OF COBRA), this is no low budget quickie. The stars aren't huge, but Anton Yelchin (as the titular hero) and Willem Dafoe (as police chief Wyatt Porter) aren't exactly unknowns, either. Apparently there was some behind the scenes conflict among various parties involved in the financing, though, and that may well be what sent this one straight to the purgatory of Netflix Instant and the handful of video stores still in existence.

Then again, it might be that the movie just feels kind of off. ODD THOMAS seems to be going for an eighties kind of vibe (and if anyone remakes or reboots the BACK TO THE FUTURE films, Yelchin is the guy to call). It more or less succeeds in that respect thanks to Sommers' direction, but Sommers the writer really should have let someone else take a pass at dialogue. Movie dialogue certainly doesn't have to sound like real life conversations to be good, but here nearly every sentence uttered by nearly every character comes off as awkward, clunky, and overly thought out. Push that aside, though, and the movie is kind of fun.

Odd (that's his actual birth name) has the ability to see dead people, at least the ones who still have unfinished business on earth. That often means murder victims, and when Odd comes across a soul in need, he considers it his duty to use his gifts to track down their killer. He also can see creatures called bodachs. Invisible to almost everyone else, these nasties feast on human misery, and tend to gather in large numbers just before particularly ugly tragedies take place. And recently, the bodachs are gathering in really, really large numbers right in Odd's home town.

So what we have here is a movie that lands somewhere in the vicinity of THE FRIGHTENERS by way of JACK BROOKS: MONSTER SLAYER with an obvious nod to THE SIXTH SENSE for good measure. Other influences and antecedents include Sam Raimi's EVIL DEAD films and comic books like Dylan Dog and Baltimore. It's trash, but it's fun trash, and despite its low budget ($27 million may not seem like a small sum to you or I, but in Hollywood...) it's a slick, polished piece of product.

It's hard to say if it would have clicked with audiences if it had been given a big screen release. My guess is probably not. As a rental/stream for horror or cult fans looking for something fun but not too cheap or cheesy, though, it should do just fine. 2 ½ out of 4 stars.
Posted by Bob Ignizio at 1:22 AM