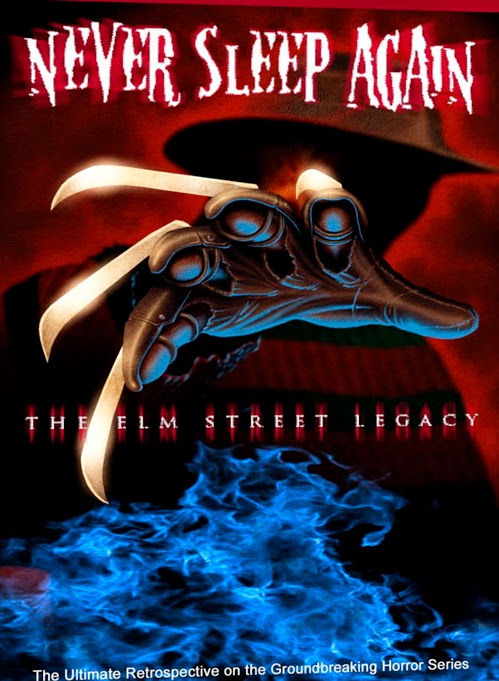 If you would have asked me to make a list of subjects worthy of a four hour documentary film, it's safe to say that the NIGHTMARE ON ELM STREET series created by writer/director Wes Craven and starring Rober Englund as wise-cracking supernatural child murderer Freddy Kreuger wouldn't have been on it. Apparently the folks responsible for NEVER SLEEP AGAIN: THE ELM STREET LEGACY (writer Thommy Hutson and co-directors Daniel Farrands and Andrew Kasch) have slightly different priorities than I do, though, and as it turns out that's not a such bad thing.

Just about everyone in the cast, crew, and production offices offers their memories of the films, the only notable omissions being Johnny Depp (who made his big screen debut in the original A NIGHTMARE ON ELM STREET) and Patricia Arquette (heroine of A NIGHTMARE ON ELM STREET 3: DREAM WARRIORS). Wes Craven is given a good amount of screen time as befits the man who launched the series, but as the film goes on into the sequels, New Line Cinema studio head Robert Shaye emerges as the main guiding force of the series, for better or worse (usually worse). The film also explores the cultural impact of the ELM STREET films, which was considerable. Love Freddy or hate him, if you lived through the eighties you were hard pressed to escape him.

What keeps NEVER SLEEP AGAIN from being the sort of puff piece one might find as a DVD or Blu Ray extra is the way it shows a small, personal horror film was transformed by success into a huge corporate franchise where multiple cooks very often spoiled the broth, along the way elevating New Line Cinema from a low rent distributor of exploitation films into a major studio. Everyone speaks with great candor, and learning how the biggest missteps in the series came to be (especially A NIGHTMARE ON ELM STREET 2: FREDDY'S REVENGE aka “the gay one”) is often more interesting that the films themselves. Even if you have little or no interest in the NIGHTMARE series, it makes for an excellent lesson in how good movies become lousy franchises and yet keep on going because there's still milk to be pumped out of the cash cow.

Yeah, it's a pretty hefty investment of your time, but there's never a dull moment. And while fans of the ELM STREET series are the most likely to appreciate NEVER SLEEP AGAIN, but there's something here for anyone with an interest in how films are made and marketed. 4 out of 4 stars.