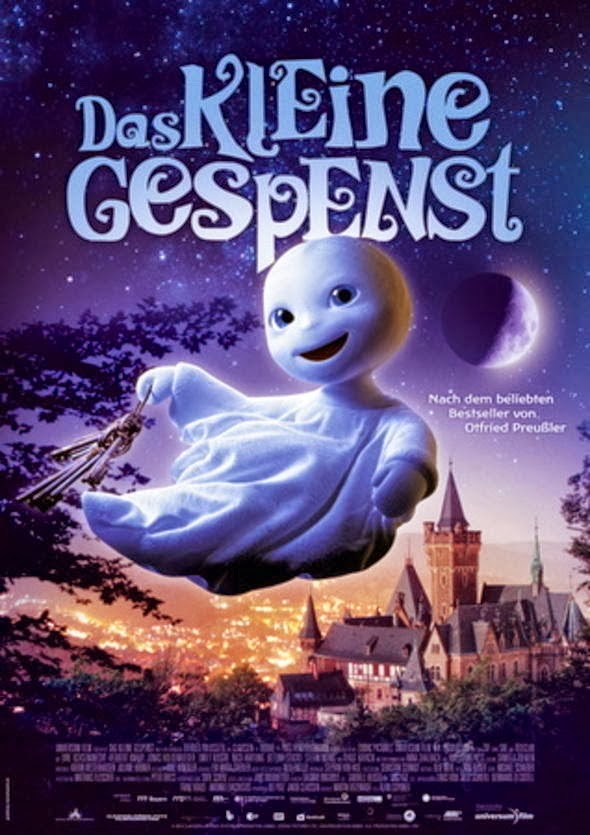 Since I started this year's edition of 31 Days of Halloween, I've watched an awful lot of onscreen mayhem and brutality. This time, I thought I'd go for something a little bit different.

THE LITTLE GHOST is a kid's movie about a “nighttime ghost” who wakes up for an hour between midnight and 1:00 am every night in a European castle. As the ghost tells us in song, he has been there a hundred or maybe a thousand years. He has a set of magic keys that can open any door, and his friends are a wise old owl and a pair of paintings: one of a Swiss general who once lay siege to the town the castle is in, and the other of an aristocratic lady. He's reasonably happy with his lot, but wishes he could see the daylight just once.

Across town, Karl (Jonas Holdenrieder) is a ghost-crazed little boy who watches the little ghost through his telescope. One day Karl's class takes a nighttime field trip to the castle and he meets the ghost in person while the diminutive spirit is in the process of turning back all the timepieces in the castle. Evidently the time the ghost is awake is tied to one of them. Anyway, the ghost is startled to have someone see him and inadvertently takes off with a particularly important watch. Of course Karl gets the blame, and none of the adults believes him when he says the ghost took it. And so the stage is set for some fairly tame fun for grade school age kids.

The film is a German/Swiss co-production and, in its original form, the spoken language is German. Even the snootiest foreign film snob wouldn't expect little kids to read subtitles, though, so the film comes with an English dub (the original audio is available, too). The dubbing is awful, but that's pretty much the nature of the beast. It never stopped me from enjoying Godzilla movies when I was a kid, and I doubt most kids these days will care that the lips of the actors don't always match up with the sounds supposedly emanating from their mouths.

There are some awkward moments in the film due to a subplot about the ghost turning black thanks to exposure to sunlight. The filmmakers are obviously aware of the possible racial connotations of this issue, as they even include a (bad) joke about a black mailman overhearing some of the white authorities talking about the dangerous “black unknown” (as the ghost is called). Otherwise it's all incredibly lightweight and innocuous stuff.

It also bears mentioning that, unlike most American family films, there's no effort at all made to pander to the grown-ups. That's arguably the thing I appreciated most about the film, as the pop culture references and double entendres in most modern kiddie fare have grown tiresome. Unfortunately that's about all I can say about the film that's good. The story just isn't that gripping, and even at the film's target age I think I would have been bored. And on just a pure filmmaking level, this is mediocre at best. 2 out of 4 stars.
Posted by Bob Ignizio at 12:17 AM