31 Days of Halloween 2014: Knights of Badassdom 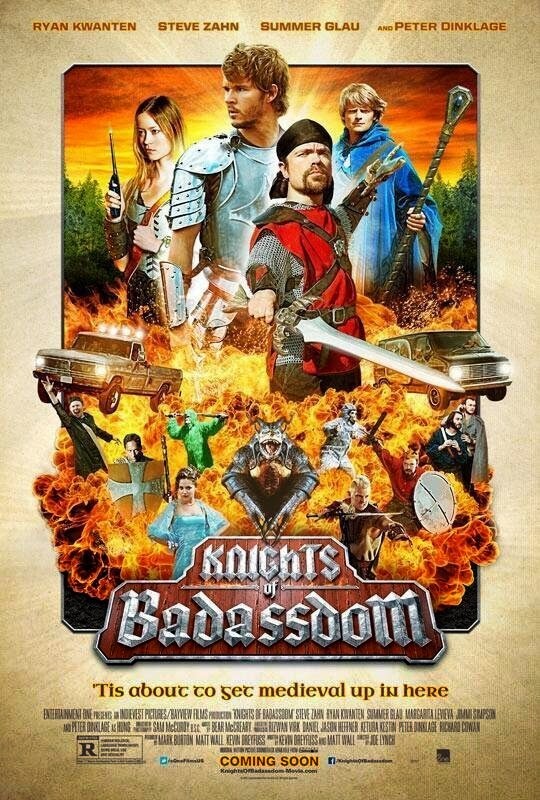 It wouldn't be hard to make fun of live action role playing aficionados. These are the folks who take tabletop fantasy games like Dungeons & Dragons one step further by actually acting out the epic battles against orcs and wizards while dressed in full fantasy regalia. Horror comedy KNIGHTS OF BADASSDOM, however, realizes that bigger and better laughs can be had by laughing with the larpers rather than at them.

The plot is set in motion when Joe (Ryan Kwanten) is dumped by his uptight girlfriend Beth (Margarita Levieva) for being a loser in general. Joe's friends Eric (Steve Zahn) and Hung (Peter Dinklage), both avid larpers, try to help him get over his loss by getting him high and shanghaiing him to run around in the woods fighting make believe battles for the weekend. Their party is rounded out by cute nerd girl Gwen (Summer Glau), her mentally unstable cousin Gunther (Brett Gipson), and wily player Lando (Dani Pudi). Together they hope to best the other combatants gathered together for an epic battle by dungeon master Ronnie (Jimmi Simpson). What no one counts on is the magic tome Eric has picked up as a prop turns out to be the real deal, summoning up a sexy but homicidal succubus who looks just like Joe's ex. Before long the body count starts to rise, and it's no game.

It's obvious that screenwriters Kevin Dreyfuss and Matt Wall have a genuine knowledge of and affection for the world they're depicting here. I stopped with the tabletop games myself, but I know a fair number of folks who have larped, and the basic types here ring true. Dinklage's psychedelic mushroom-munching slacker in particular feels quite familiar. Great work by the whole cast, though, with no one slipping into condescension for their characters. This isn't a REVENGE OF THE NERDS type of film where the losers fight back; in their minds, these guys are the cool ones.

There is a slight bit of a slobs vs. the snobs subplot where a group of paint ballers get in a feud with the larpers, and it's easily the least interesting aspect of the film. Thankfully it doesn't take up much screen time, though. The only other real issue is in trying to maintain the delicate balance between horror and humor. The laughs are plentiful, and so are the kills, but ultimately the sheer quantity of carnage threatens to take some of the fun out of the proceedings, at least for this viewer. Still, for a low budget cult film KNIGHTS OF BADASSDOM gets far more right than most, and minor quibbles aside this is exactly the kind of fun, sincere genre film that we haven't seen much of since guys like Sam Raimi and Peter Jackson were working in the horror genre before moving on to more mainstream fare. 2 ½ out of 4 stars.
Posted by Bob Ignizio at 12:49 AM