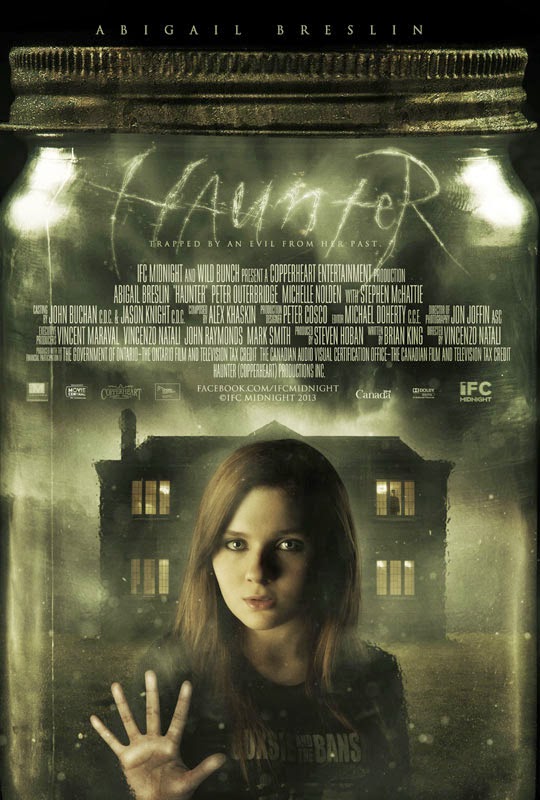 HAUNTER is sort of like a cross between GROUNDHOG DAY and THE OTHERS. Ghost girl Lisa Johnson (Abigail Breslin) and the rest of her phantasmal family – dad Bruce (Peter Outerbridge), mom Carole (Michelle Nolden), and little brother Robbie – are stuck reliving the same day in 1985 over and over again. And it's a pretty tiresome day to keep reliving since they can't go anywhere due to the fog surrounding their home and a car that won't start. Still, no one is much bothered by this state of affairs since they don't realize they're stuck in a loop. Once voices from the other side start trying to contact Lisa, though, she becomes aware of her predicament. It doesn't stop the loop, but now there are subtle differences each time she relives the day. Perhaps most notably, a new person becomes a presence in the form of a telephone repairman (Stephen McHattie).

Sure it gets by to a large degree on a high concept gimmick, but HAUNTER is still a pretty fun mystery/ghost story. We know fairly early on that Lisa is already dead, but Brian King's script doesn't hinge on that fact being a surprise. Rather the film is about Lisa having the courage to go into her subconscious and remember what really happened to her and her family, and then to fight to save another family in the present from having the same fate befall them. Director Vincenzo Natali (CUBE, SPLICE) does a fine job of maintaining suspense and generating concern for Lisa even though, in theory, things can't get much worse for her. 3 out of 4 stars.
Posted by Bob Ignizio at 2:26 AM