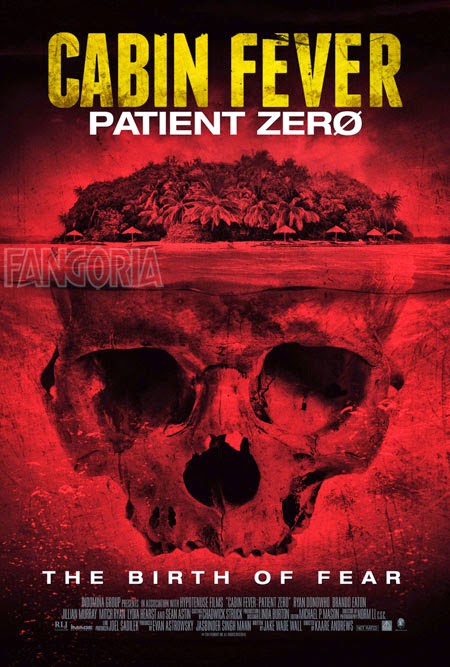 It is by no means a new development that any moderately successful horror movie will beget at least one sequel, probably more. So it should come as no surprise that CABIN FEVER, Eli Roth's 2002 directorial debut, has become a franchise. It should also come as no surprise to anyone familiar with how these things go that the follow-ups lack whatever merits the original film might have had. Even with a gifted director like Ti West at the helm, CABIN FEVER 2: SPRING FEVER was all but unwatchable (although to be fair, the producers recut West's film so extensively that he asked to have his name removed, a request that was denied). I don't know if CABIN FEVER: PATIENT ZERO director Kaare Andrews asked to have his name removed as well, but if I were him I probably would have.

PATIENT ZERO is a prequel which sets out to answer the burning question no one was asking: how did the flesh eating virus in the other two CABIN FEVER movies get started? Evidently it was the fault of Porter (Sean Astin), a sort of Typhoid Mary who carries the disease but is himself asymptomatic. He's being kept against his will in a secret island government facility by B-movie scientist Dr. Edwards (Currie Graham) and his two nurses: Camila (Solly Duran), who keeps her lab coat buttoned up and is sympathetic towards Porter, and the high heel and push up bra wearing Bridget (Lydia Hearst, daughter of Patricia).

At the same time on the mainland, Marcus (Mitch Ryan) is about to get married to Katia (Claudette Lali). His irresponsible brother Josh (Brandon Eaton), friend Dobbs (Ryan Donowho), and Josh's girlfriend (and Marcus' ex) Penny (Jillian Murray) convince the groom to be to come along for an island bachelor party. They've found the perfect place, not on any map. Guess where that is.

Love or hate Eli Roth's original CABIN FEVER, even with all the winks at nods to other horror films it was a fairly original affair. This feels like one of those nineties Roger Corman productions, only with less of a budget, and helmed by a competent but completely apathetic director (comic book artist Kaare Andrews) from a script by Jake Wade Wall that couldn't be more uninsteresting if it tried. Yeah, the requisite blood, breasts, and beasts are all present, but even the exploitation elements are handled without style or enthusiasm. 1 out of 4 stars.
Posted by Bob Ignizio at 2:19 PM