31 Days of Halloween 2014: Blood Lake: Attack of the Killer Lampreys 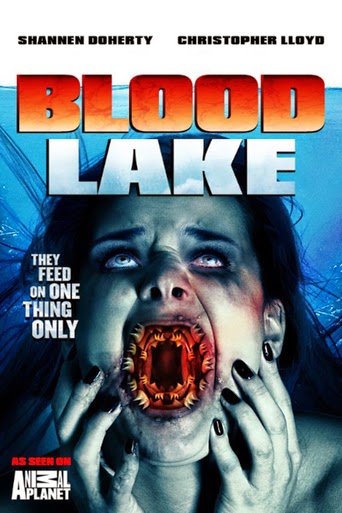 The film BLOOD LAKE: ATTACK OF THE LAMPREYS most closely resembles is Joe Dante's original 1978 PIRANHA, easily the best of the JAWS rip-offs of that era. PIRANHA benefited mightily from Dante's stylish direction and humorous sensibility, and a script by John Sayles that was almost too good for a low budget rubber fish movie. By comparison BLOOD LAKE's script, by Delondra Williams and Anna Rasmussen, feels like the outline to Sayles' screenplay before the characters got fleshed out and all the fun, quirky bits of business were added in. And if director James Cullen Bressack has anything that could be considered a style, he hides it well here. I guess you don't have time to put much of a stamp on your work when you're cranking out seven movies a year, though.

Baywatch star and veteran of numerous B movies and TV guest spots Jason Brooks is the film's Chief Brody equivalent as fish and wildlife officer Michael, while Beverly Hills 90120 and Charmed bad girl Shannen Doherty has the thankless role of his wife Cate. Everyone's favorite holiday bully Zack Ward (Scut Farkas in A CHRISTMAS STORY) and Rachel True (THE CRAFT) play local cops, and Christopher Lloyd, who lately seems to be making a habit of appearing in these kind of schlockfests, is the idiot mayor who refuses to close the lakes even though he knows that killer lampreys are eating his constituents.

You would be hard pressed to make a more generic film of its type than BLOOD LAKE. Even the similarly named and almost as derivative BLOOD GLACIER at least threw out a few fresh ideas. BLOOD LAKE has absolutely no aspirations beyond being watchable filler for the Syfy network (although this apparently had its debut on Animal Planet). Don't get me wrong, for a movie of its ilk it's not half bad. The production values are acceptable, the cast of C-list actors acquit themselves capably, and the movie delivers on the blood, gore, and CGI monsters. There's just not much personality or life to the thing. 2 out of 4 stars.
Posted by Bob Ignizio at 12:00 AM