31 Days of Halloween 2014: All Cheerleaders Die 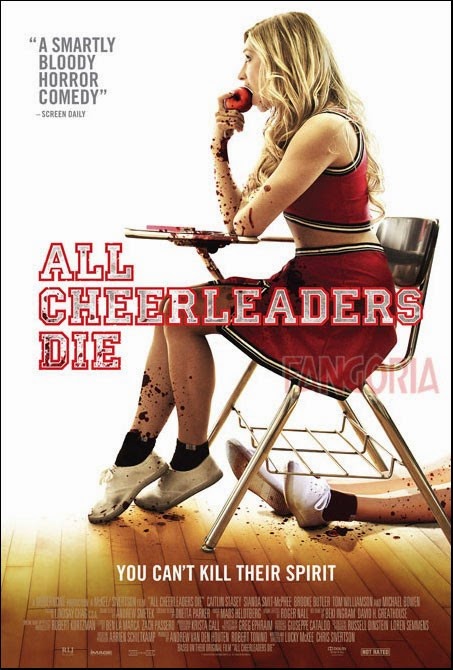 Expanding their 2001 short film into a feature, co-writers/directors Lucky McKee and Chris Sivertson's ALL CHEERLEADERS DIE starts off promisingly enough. Otsider Maddy (Caitlin Stasey) is making a documentary about her cheerleader friend Alexis (Felisha Cooper). While showing off for the camera doing a human pyramid, Alexis falls and breaks her neck, dying. Flash forward a few months to the end of summer vacation and we find Maddy has dumped her Wiccan girlfriend Leena (Sianoa Smit-McPhee) and joined the cheerleading team. Neither Leena nor the audience understands why at this point, but for reasons that won't be disclosed until later in the film, Maddy is looking to get revenge against Terry (Tom Williamson), former boyfriend of the late Alexis.

Not one to waste much time mourning, Terry has taken up with another cheerleader, Tracy (Brooke Butler). Maddy not only convinces Tracy that Terry is cheating on her, but manages to seduce the girl as well. This doesn't sit well with Terry, and at a player/cheerleader party in the woods he punches Tracy in the face. Tracy and Maddy, along with uptight Christian cheerleader Martha (Reanin Johannink) and her sister Hanna (Amanda Grace Cooper, who we're supposed to believe is ugly and unpopular – right) get in their car to leave, but an enraged Terry and the rest of his jock friends chase after them and run them off the road.

The girls are left for dead by the jocks, with only quarterback Vik (Jordan Wilson) showing much remorse. Thanks to Leena's magic powers, however, the cheerleaders are brought back from the dead as vampire zombie something or others. They still have their full mental faculties, but they also have a thirst for blood.

The setup is there either for the sort of over the top trashy shocker its title suggests, or a more serious minded social commentary horror film about the way a certain kind of guy views women as disposable, but the film can't seem to make up its mind. It wouldn't be impossible to balance these two seemingly at odds approaches, but apparently it's more than McKee and Sivertson can pull off. Their film is too silly to be taken seriously, and too self important to have much fun with. Not to mention that on a pure scripting level, it's just a mess.

There are too many characters, and ultimately not a one we can really root for. Even Maddy, who should have our sympathies, winds up doing something late in the film that makes her about as bad as any of the other characters. And leaving aside the fact that the rules governing Leena's magic are vague and confusing, it's really hard to swallow that a character with no magical experience whatsoever just instinctively knows how to use those powers himself towards the end.

Whether you come to this film expecting an enjoyable exploitation film, or something smarter that subverts genre conventions and has something to say, either way you'll be disappointed. And to top it all off, the movie ends with the threat/promise of a sequel and no real satisfying resolution. 1 out of 4 stars.
Posted by Bob Ignizio at 1:14 AM