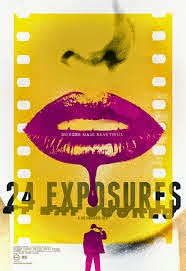 When I decided to dive head first into more or less randomly watching new release horror films for this year's “31 Days of Halloween” blogathon, I fully expected to see a lot of bad movies. So far, though, I've had pretty good luck. No real classics, although Ti West's THESACRAMENT came close, but overall I've seen a fairly entertaining batch of fright flicks.

Well, luck has to run out sooner or later, and with Joe Swanberg's 24 EXPOSURES it runs out hard. In some ways, this is more like some mid sixties roughie than a true horror film. In those films, back when depictions of nudity and sex could still get a filmmaker, distributor, or exhibitor into legal hot water, it tended to be safer to make movies in which naked women were tortured and/or killed than ones in which they had sex.

In Swanberg's films, most of the violence is staged within the narrative by photographer/filmmaker/artist Billy (Adam Wingard, director of last year's YOU'RE NEXT which featured Swanberg in one of the main roles), who has a thing for photographing sexy girls playing dead. But when one of Billy's models turns up dead for real, we have to wonder if maybe decided to move from fantasy to reality.

Most of 24 EXPOSURES is improvised, or at least feels that way. There are a number of scenes involving attractive women in various stages of undress, occasionally involved in simulated sexual activity with Billy and/or his girlfriend Alex (Caroline White). A police officer (Simon Barrett) having problems with his girlfriend investigates. Eventually it all just fizzles out with no real resolution.

Maybe if this were the nineties and the internet didn't exist, someone somewhere might get some joy out of watching 24 EXPOSURES strictly for the nudity and sex, which are fairly plentiful. Anyone hoping for much more than that will find it a difficult slog, even at a mere 74 minutes. Swanberg obviously knows how to make a film – one would hope so given how prolific he is – but this is far too self indulgent and self absorbed to reach much of an audience. 1 out of 4 stars.
Posted by Bob Ignizio at 12:22 AM