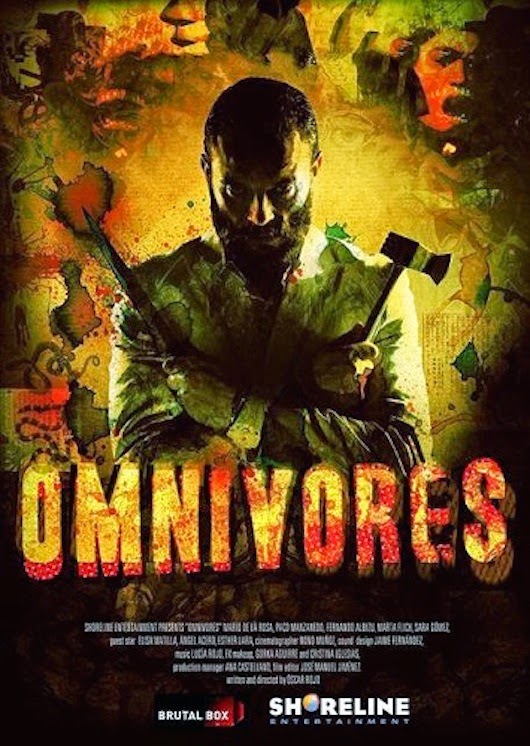 Usually when horror films delve into tales of cannibalism, its some sort of inbred backwoods pyscho who has a taste for human flesh. Sure, there's Hannibal Lecter on the more sophisticated side, but he's the exception rather than the rule.

The Spanish shocker OMNIVORES starts out with a cannibal who seems like one of the former, a young boy named Dimas (Fernando Albizu) who finds himself in a situation where he has to eat his dead mother's flesh in order to survive.Years later, Dimas has become wealthy and suave, but still with a taste for long pig. Apparently he acquired that wealth by sharing his unusual culinary practices with those interested in trying the ultimate in rare cuisine who are rich enough to pay Dimas' price. He even has a whole group of accomplices aiding him in this endeavor, most importantly the unnamed mad butcher (Paco Manzanedo) who procures and filets those destined to be the main course.

Meanwhile, writer Marcos Vela (Mario de la Rosa) has been given an assignment to write about underground pop-up restaurants serving exotic fare. After relatively tame dinner parties involving fugu (Japanese puffer fish that can be deadly if not prepared right), it's no real surprise for the viewer when Marcos discovers the existence of the cannibal feasts and feels compelled to investigate. But will he be able to get the story without having to taste the main course, or worse yet, become it?

In many ways, OMNIVORES feels like a seventies/eighties Euro thriller, or giallo as they are known. Despite the fairly lurid subject matter, it plays everything with a straight face, even when some of the plotting starts to border on the ridiculous. And along with the violence and gore, there's also a fair amount of eroticism and nudity.

One can also see the influence of another Spanish filmmaker on writer/director Óscar Rojo, the prolific and idiosyncratic Jesus “Jess” Franco. The butcher may not have a name in the film, but you might as well call him Morpho, the appellation Franco bestowed upon many of his deformed assistant types. And one imagines Franco would have approved of the mix of sex, sadism, and the taboo of cannibalism as well, something he himself dealt with in more than a few films. I have no idea if Rojo really was influenced by Franco, but it certainly seems a possibility given that any modern horror director from Spain would want to be verse in the works of what few antecedents that country has in the genre.

OMNIVORES is not a fun film, but Rojo's direction ensures that it remains compelling despite only minimal fleshing out of any character other than Marcos, and some hard to swallow implausibilities in the script. Still, the final USUAL SUSPECTS style ending in which the film's final twist plays out is effective, and provided one can stomach the subject matter OMNIVORES is a better than average horror thriller aimed more at mature audiences than the usual teenage crowd. 2 ½ out of 4 stars.