[THE ZERO THEOREM opens in Akron on Friday September 19th exclusively at the Nightlight Cinema.] 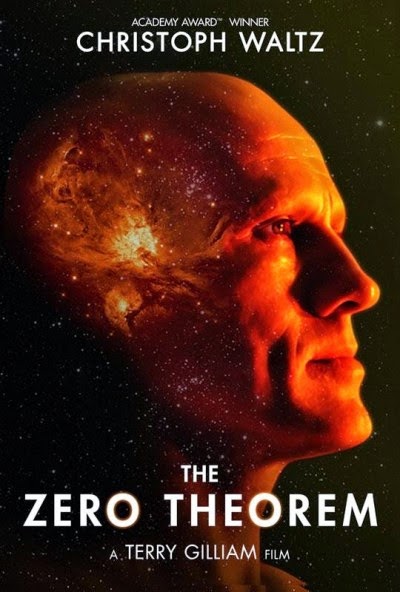 Veering closer to an actual reflection on the meaning of life than his work on Monty Python’s cheekily titled third feature ever managed, Terry Gilliam’s THE ZERO THEOREM is an enjoyable (if unremarkable) rehash of the director’s greatest hits, bolstered by fun performances and Gilliam’s usual flair for wild, sumptuous visuals.

Qolin (Cristoph Waltz) works as a computer-programming drone for Mancom, an expansive corporation responsible for pedaling all manner of technological accessories to a neon-drenched near-future society. Sporting a bald head to match his Strigoian pallor, Qolin trudges through his daily routine, searching for meaning amid the clamor and consumption until he receives a humdinger of an assignment from The Management (Matt Damon): solve a near impossible equation that will prove life is meaningless. All the while, Bainsley (Mélanie Thierry), an enticing, mysterious sex worker and The Management’s brash-but-savvy adolescent son Bob (Lucas Hedges) both vie for Qolin’s reluctant attention.

In recent interviews, Gilliam has refuted The Guardian’s claim that he referred to THEOREM as “the third part of a trilogy formed by earlier dystopian satires BRAZIL and 12 MONKEYS.” If he actually never said it, I understand his protests: the society portrayed in the film - a frantic, florescent capitalism populated by a menagerie of babbling advertisements,  mobile devices and bud-corked ears, while cartoonishly exaggerated, isn’t really any more dystopic than our modern world. Still, certain other structural and cinematic comparisons to BRAZIL are unavoidable, and never come out in THEOREM’s favor.

Qolin's and Bainsley's intermittent retreats into a digital fantasy world recall BRAZIL’s David Lowry’s mythic imaginings, while both Qolin’s company workspace and direct supervisor Joby (David Thewlis) are technicolor cousins of those in Central Services. Heap on a healthy dose of paranoia surrounding which characters are and which aren’t corporate agents, and the entire film can start to feel like an updated, less coherent retread of his Gilliam's 1985 Orwellian nightmare.

On the other hand, while BRAZIL employs a relatively linear narrative to introduce Lowry as an unlikely protagonist fighting against a clearly malicious fascist regime,  ZERO THEOREM’s just-barely-on-the-rails script (written by first-time screenwriter Paty Rushin) spins an accordingly oblique tale of existential angst as  brutally refracted  through the lens of modern first-world capitalism.

It wouldn’t be a Gilliam joint without some easy-bake satire – pedal-operated computers,  a digital psychologist (Tilda Swinton), a party where every attendee dances alone to music piped through headphones from their own mobile device – but rather than cast Qolin as a lone ascetic, wielding discontent like a weapon against faceless corporate foes, the film takes a step back to look at the complex relationship between technology and the consumer, especially as it relates isolation and imagination.

If there’s one thread that runs through all of Gilliam’s work, it’s the insistence that the human imagination is the species’ most powerful and precious advantage, allowing infinite opportunities for outward expression and inward exploration. While the creative act can offer untold rewards when used to translate and communicate ideas among people, it can also prove hazardous when used as a cheap means of personal retreat... when used to construct appealing, but dishonest alterations to reality - small pockets of self-deception in which to wait out the perpetual storm.

THE ZERO THEOREM poses technology as a tool for enhancing the power of imagination, exponentially increasing its potential to both free information and imprison the mind.

Certainly, the film isn’t  the first bit of art to reflect on the dangers of a plugged-in, tuned-out society reduced to a dead eyes pointed toward its giant puckered navel. And while it deftly avoids becoming a technophobic screed, its portrayal of cybersex and relationships in its technological wonderland are (aside from Qolin’s hilariously unsexy VR suit) bracingly clichéd (I never thought Gilliam would ever induce me to say, “hey – that’s like in DEMOLITION MAN!)

I can see  film viewers feistier than myself regarding THE ZERO THEOREM as nothing more than a messy game of spot the trope, where half the winning answers (Virtual reality… Advertising holograms…) are tired science fiction gimmicks and the other half (Fish-eye lens… Dwarf…) are familiar Terry Gilliam stylistics.

But it's also colorful, kinetic, unapologetic and fun, with cute li'l paradox thumping away inside its humanistic middle: man finds meaning in life by proving life meaningless.

Feistier film viewers: you’ve been warned. Everyone else: Terry Gilliam has a new movie. It’s got virtual reality! And a dwarf! (2.5 out of 4 Stars)